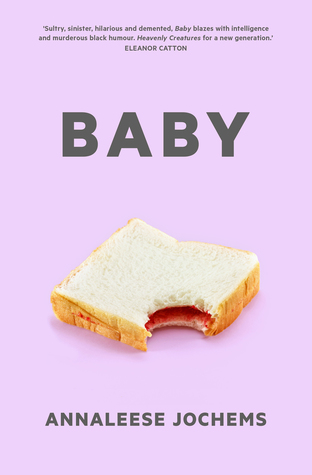 There is little to like in Baby, a black comedy that is neatly tucked inside an oh-so-innocent looking cover, but maybe that is the point. The story of some thoroughly selfish people whose first impressions of each other are quite wrong makes for uncomfortable reading and takes a lot of time to get going. Told from the third person perspective of Cynthia, a recent university graduate, the story opens with her upping and leaving town with Anahera--a slightly older woman who she has a crush on. Cynthia believes that the two will live in blissful happiness on board a boat named Baby that they have bought with stolen money. For Anahera, however, Cynthia is simply a means to an end, someone who helps her to escape her husband and her job. And then some fairly horrible events occur on an island and a love triangle develops between Cynthia, Anahera and Gordon, a man that they pick up along the way. And soon, the worst parts of each of their personalities come out to play, which provides some dark and uncomfortable humour.

There is little to like about this book, though the second half was strangely addictive as I wondered just how far the author could--and would--push boundaries. Cynthia's behaviour reflects that of a childish narcissist, used to getting their own way and whose fantasies on how she would like the world to be often conflict with how the world is, to the point she is rarely able to see the obvious being played out in front of her eyes. Anahera and Gordon, meanwhile, are as bad as each other--nasty and selfish people, though both have some degree of common sense.

Ultimately, though, this isn't a great book. Certainly, there is some lovely prose, the setting is unusual and the author has a bit to say about the worst parts of human nature, but there isn't much to recommend it. There's little in the way of character development and the whole thing relies on the premise that the people involved are arseholes who deserve everything they get and more. To be in their situation would be intolerable. To be a fly on the wall, however ...

I'm at a loss to explain why this one won an award or has received so much critical acclaim, but obliviously someone or a lot of someones out there see some kind of literary merit in there that I have clearly missed.
Annaleesa Jochems Baby