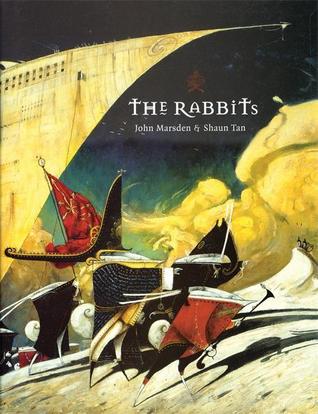 The Rabbits is a rarity--a picture book for teenagers. And unsurprisingly, it is about rabbits. Or more specifically, it is about a group of rabbits who decided to come and live in a specific place. They don't know the rules of their new land, so they bring with them their own rules and their own ways. It causes some friction between the land's original inhabitants, eventually there is a fight to be had and the rabbits conquer the land. This story though, is the story of the side that lost, and indeed, just how much they lost, from a way of life to the natural environment that was so fundamental to who they were.

It's heartbreaking, and it's deeply metaphorical. And the illustrations are so very haunting.

Initially, I wondered if The Rabbits was a way of explaining the European invasion of Australia, but then I realised that the story could just as easily be talking about many other parts of the world that have been invaded by one group or another at various times. We could just as easily apply the story to the British Colonisation of America or, indeed any point in history where a country has been invaded. It's also a story of a clash of cultures, of differing beliefs about technology and leaves some pretty big questions about what happens to the local environment when we seek to conquer and change it.