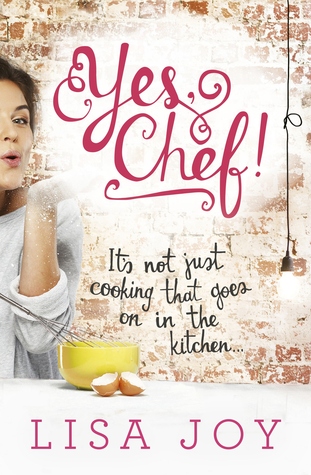 Aussie author Lisa Joy's debut novel Yes, Chef! offers readers an entertaining glimpse into the life of a young woman who finds herself working as a PA to an unpleasant celebrity chef. At age twenty-nine, Becca Stone is not in a great place in her life--although she is intelligent and well-educated, she has struggled with her career and relationship choices. For many young women this is a relatable scenario--feeling that by the time they are almost thirty that they have missed out the two big things that are often held up as the benchmarks of a successful adulthood. Anyway, Becca finds herself promoted from her position of taking reservations at a restaurant to being the PA of Damien, the nasty celebrity chef who owns the business, and soon after finds herself a string of wealthy suitors, and discovers that life at the top is really not so wonderful.

Yes, Chef! contains some dark themes the heroine has flaws that make her seem more human that endearing and parts of the novel pushed me out of my comfort zone in ways that I was not expecting, for example a surprise kiss between two characters that leads nowhere (and that feels out of sync with the rest of the story,) and there are a few scenes that depict sexual harassment as being more or less ingrained in the food and hospitality industry until an event occurs that makes Becca realise that she should not have to just accept it. Although uncomfortable, it does feel quite realistic as, sadly, people will often tolerate sexual harassment or not understand the impact that it has on others, until it is too late. I thoroughly enjoyed the scenes where Becca stands up to her boss--you go girl!

Becca's growth as a character was slow at first, though as she came to understand more about her circumstances, she became quite a strong and capable woman. Although intelligent, she was initially somewhat naive and was easily led astray first by Aaron and then by Jonah, both men who had their own self-serving agendas. (Becca is unaware that Aaron is engaged to a colleague's daughter, while Jonah at least is a bit more upfront about just wanting a fling.) This is not entirely unrealistic--often intelligent women can also be the most naive when it comes to men and dating. Still, she learns her lesson in the end and Dean comes across as a wholly likeable suitor.

Although I enjoyed reading Yes, Chef! I disagree with the description that this is a romantic story. It may have a romantic ending, but Dean feels more like a side character, rather than someone who drives the plot. I think it is also a perfect example of the way books with female characters and that are aimed at a female audience are marketed--parts of this novel are dark and our narrator is flawed. There is nothing wrong with either of those things--I think it is great and I love it when fiction challenges me in unexpected ways--but the current cover suggests a much lighter and fluffier story. There are some great bits in there about food and cooking.

Thank you to Penguin Books Australia and Netgalley for my review copy.

shelleyrae @ book'd out said…
I agree this is not really a romance, more straight women's fiction. Thanks for sharing your #eclecticreader review,