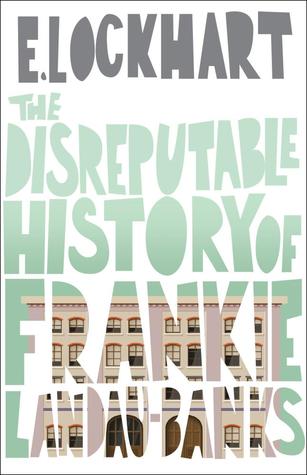 The Disreputable History of Frankie Landau-Banks is a surprisingly complex young adult novel, offering readers an interesting and inventive take on sexism, social climbing and peer pressure. Frankie Landau-Banks is the youngest child in her family (known to the other family members as 'bunny-rabbit,) and is a mildly geeky girl, who suddenly becomes popular when she hits puberty, develops an attractive figure and gains the attention of an older and very popular boy at their highly competitive American boarding school. But popularity and being allowed to play with the popular kids is not nearly as fun as it might seem. As Frankie grows increasingly bored and frustrated with a boyfriend who seems unable to see her as anything other than a cute, sweet girl, she develops a cunning plan to play on everyone around her and, she hopes, to eventually gain some respect from Matthew.

Much has been said about how the novel addresses sexism already, so it seems rather pointless for me to offer a detailed description of that here. For the benefit of anyone who has not read the novel, in the social hierarchy at the boarding school, the boys are top, the girls want to hang around with them but can only do so when it is on the boys terms. The only girls who can become popular are the ones who the top boys deem suitable. Some of the boys belong to a secret society--the secret order of the basset hounds--and girls are not allowed to join. And, of course, there is the utter disdain that Frankie is treated with after she is discovered to be responsible for the pranks, and the fact that she does not earn the respect that she so desperately desires.

Obviously, this is all very unfair and there are numerous passages within the book that address this. However, there are a number of themes that run through the book alongside that. The most important one, I feel, is that it highlights the utter frustration that is so often experienced by highly intelligent teenagers such as Frankie. She might be clever, but rather than being recognised for her intelligence, it is often overlooked--Matthew and his friends, particularly Alpha--could not care less about what she has to say, in part because they cannot understand it and in part because they do not want their positions challenged. We also see some of Frankie's pranks fall a little bit flat (such as the swimming pool prank,) as her peers are unable to see any kind of deeper meaning or social commentary within them. The Secret Order of the Bassett Hounds, Frankie eventually becomes to discover isn't a great movement where students can challenge authority. Rather, it's an exclusive club, where a few members can enjoy a few predictable stunts (such as drinking alcohol on a golf course,) and pretend to themselves that they are rebels. And, of course, the boys involved are subject to their own kinds of peer pressure as well and demands that they behave a certain way in order to gain respect and fit in--there is a reason why Alpha is happy to take the credit for all of the pranks that Frankie did, he has a reputation to keep and does not want to lose the respect of his peers. Some of the boys date girls, not because they like them, but because the other members of the group think that he should be dating that particular girl. And we see at the end that perhaps Alpha is the one person who might actually have some kind of respect for Frankie, though he will be unlikely to admit it. Meanwhile, Matthew has a reputation to keep up as a peacekeeper and a popular boy, and consequently, seems unable to develop and maintain any real and honest friendships. So, while Frankie suffers, so too do the boys who are supposedly at the top of the order. I think many of the characters, not just Frankie struggle with the idea of being true to themselves versus wanting to fit in.

The novels ending is fitting, with Frankie deciding that it is better to be alone than surrounded by people who cannot see her. We also see that she did not gain the recognition or notoriety that she hoped through her pranks, that Matthew can see her now but that he also despises her, and that although she may have shown a number of people up, it all amounts to very little. And much like Lord of the Flies, Watership Down or Animal Farm, the whole thing is a clever metaphor about human behaviour written in a way that can be understood by teenagers and the wider reading public.

Anyway, this one is an enjoyable read that I suspect will probably mean many different things to different readers.
E Lockheart The Disreputable History of Frankie Landau-Banks

Kathryn White said…
Thank you--I felt that there was a lot of things in the book worth discussing as well as the more obvious themes.
19 March 2015 at 19:40