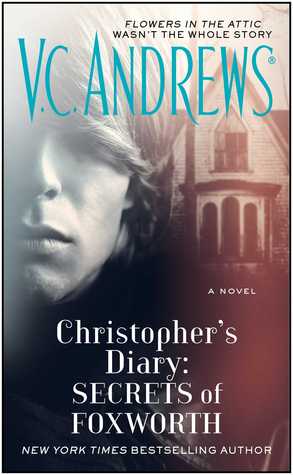 Many, many readers will no doubt be familiar with Flowers in the Attic, the iconic gothic story by V.C. Andrews about the four Dollanganger children who were locked in their grandparents attic and slowly poisoned so that their mother could gain her inheritance. But what if Flowers in the Attic and its sequels never told the full story? That is the surprising premise of The Diaries a spin-off/companion series to Flowers in the Attic written by prolific pulp/horror novelist Andrew Neiderman, who in addition to releasing a large number of novels under his own name, has worked as ghostwriter releasing books under the V.C. Andrews name since the author (whose real name is Cleo Virginia Andrews, and who is usually published as Virginia Andrews in Australia*,) died of cancer in 1986. Initially, Neiderman was brought in to finish off the remaining books in the Casteel series, and Garden of Shadows, a prequel to Flowers in the Attic told from the perspective of Olivia Foxworth, the children's cruel grandmother. However, the novels proved so successful, (and the name V.C. Andrews so profitable,) that Neiderman continued to create new novels and series, inspired by V.C. Andrews genius, of which there is now more than sixty, covering a range of topics, from family sagas, to vampires, many of them varying in degrees of quality and shock value. Christopher's Diary: Secrets of Foxworth and its sequels are, perhaps, the most risky and ambitious venture to date.

Christopher's Diary: Secrets of Foxworth opens with Kristen Masterwood an attractive young women (who has, it must be noted blonde hair cerulean blue eyes--fans of Flowers in the Attic will immediately get the reference,) who is a distant relative of the Foxworth clan through her mother who died when Kristen was quite young. The novel is set in modern day, picking up several years after Seeds of Yesterday (the final sequel to Flowers in the Attic, penned by the real V.C. Andrews,) left off. Foxworth Hall has burned down a second time and its owner, Bart Foxworth, who is described as distant and eccentric and who (disappointingly for me,) does not appear as a character in the book, is keen to sell the property and rid the family of it once and for all. There is no mention of the other members of Bart's family--half brother Jory, Jory's wife Toni, and Jory's children, twins Darren and Deirdre or the child that Jory was expecting with Toni at the end of Seeds of Yesterday. Bart's hated adopted sister Cindy, with whom he found forgiveness and who, it is hinted, may have become his significant other at the end of Seeds of Yesterday is also conspicuous by her absence. As a reader and longtime fan of the series, I found this massively disappointing. (I have always been a fan of the possibility of a relationship between Bart and Cindy, but, ultimately, I suppose, I'm a fan. A reader. I'm not the one who is telling this story.) Anyway, Kristen knows that she is distantly connected to the Foxworth clan and is intrigued by this connection. The only difficulty is that her mother has long since passed away and cannot reveal any information to Kristen about the connection and that her father is unwilling to talk about it. By coincidence, however, Kristen's father works in the construction industry and is an important part of the team that has been contracted to demolish what remains of Foxworth Hall. Kristen visits the site along with her father one day and there she makes a surprise find. Inside a tin that has miraculously survived two fires is a diary that belongs to none other that Christopher Dollanganger Junior, detailing his time locked inside the attic ...

From there, the novel works in duel narratives, going between sections of Christopher's diary and detailing Kristen's day to day life--which mostly consists of her blossoming romance with Kane, a wealthy and popular boy from her school who is also a bit intrigued by Foxworth Hall. We also see the effect that the story has on Kristen, she becomes quite caught up in it and desperate to know more, which is not unlike the effect that Flowers in the Attic had on me when I first read it as a fifteen year old, after finding a cheap paperback version at Kmart during the school holidays. Unfortunately, Kristen's life story is quite underwhelming--her romance with Kane is a little dull and the reader never does learn anything more about her connection to the Foxworth clan. Christopher's diary entries are very straightforward and lacked the drama of the original narrative in Flowers in the Attic. And while, obviously, no two people remember the same event in the same way, one of the most endearing elements of Flowers in the Attic has always been that it read like a gothic fairytale. This is true of all of the works by the real V.C. Andrews--one of her gifts was that of creating a world that was just like ours, but was also just a little bit darker and a little bit different. Consequently, her stories have a certain level of timelessness about them (a theme that she played on quite a bit in My Sweet Audrina,) for example--although Seeds of Yesterday was set in the late 1990s, it was published in 1984 and its depictions of the era are more or less authentic, due to the fact that she doesn't make a lot of references to fashion, technology or celebrities. By contrast, Neiderman's work has a more real world feel to it, and it lacks a certain level of darkness and melodrama. Christopher's Diary: Secrets of Foxworth is set in the real world and brings a real life quality to the story. It also subtly tears down the fairytale elements of Flowers in the Attic with Christopher writing off most of Cathy's behaviour as melodramatic and childish.

In other words, it is painfully obvious that these two novels are written by very different authors.

I found Christopher's Diary: Secrets of Foxworth to be an entertaining exploration of how the events of Flowers in the Attic may have been experienced by Cathy's older brother, and I loved the memories that it brought up of the first time that I read Flowers in the Attic. As a strand alone novel it is enjoyable enough. However, it falls sadly short of the novel that inspired it, there are a couple of inconsistencies (Christopher Dollanganger Senior's own career ambitions are one example,)  and it asks far more questions than it answers. (Actually, I don't think it answers any questions.) Writing a sequel and getting everything right is a very tough gig, especially when the original book a very famous one and is not your own, so it is difficult for me to not like this book, especially when it stirred up so many memories. In a funny way, I did quite like it and enjoy it, and it probably is the closest that I am ever going to get to re-living the first time that I read Flowers in the Attic. So kudos to ghostwriter Andrew Neiderman for that.

Christopher's Diary: Secrets of Foxworth is, ultimately, an unlikely spin-off of the original that is probably going to be of limited interested to anyone who is not already familiar with the book that inspired it. Recommended, but proceed with caution.