Review: Shopaholic to the Stars by Sophie Kinsella 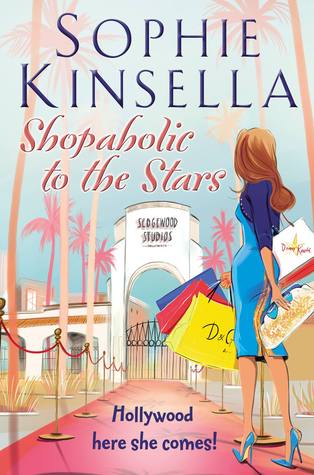 Shopaholic to the Stars is the seventh novel in Sophie Kinsella's Shopaholic series. By now, fans of the warm-hearted Becky Brandon (nee Bloomwood) know what to expect and author Kinsella delivers on the laughs and unlikely situations as she pokes gentle fun at modern life and first world problems. This time around, Becky finds herself in Hollywood while her husband Luke works with a new client, actress Sage Seymour. Soon, Becky finds herself bitten by the celebrity bug and has her sights set on a new career as a celebrity stylist. But things in Hollywood are not always as lovely as they seem ...

As previously stated, this one is the seventh novel in a series. The Shopaholic series has been around a long time--in fact I was in my teens when I read the original, The Secret Dreamworld of a Shopaholic and have even written a nostalgia post on the book on my blog. The novel was so successful it spawned several sequels that chronicled Becky's life of the course of about five years as she developed from a ditzy university graduate to a wife and mother. Along the way, she discovered that she had a long-lost half sister and had a number of unpredictable adventures that almost always involved her spending money and finding unusual ways to recoup any lost funds. In 2009 the first two books were made into a Hollywood feature film that, apart from the names of a number of key characters, had very little to do with the books. (The film, for example, was set entirely in New York and Becky was portrayed as American, rather than British and the backgrounds and careers of many major characters was altered.) Shortly after the film was released, a sixth novel came out, titled Mini Shopaholic. A little thin on plot and with some twists that were more unbelievable than funny (Becky and Luke's disastrous attempts to buy a house for example,) one thing was obvious. The magic of the earlier novels was gone. So where does the seventh novel sit?

Shopaholic to the Stars is a better novel than its predecessor. While it is a not a great novel in its own right, it does have some fun moments. There is no real character development--mostly the comedy comes from Becky being ditzy, Luke being stuffy and slightly disinterested and a number of side characters such as Suze and Tarquin having their own adventures. Alicia Bitch Long Legs makes an unwelcome reappearance and this is the first book in the series to end on a cliffhanger--it looks as though there will be a sequel set in Las Vegas.

Fun, light reading for Shopaholic fans, though anyone expecting the magic of the earlier novels may feel a little short changed.
Secret Dreamworld of a Shopaholic Shopaholic to the Stars Sophie Kinsella

Kimberly @ Midnight Book Girl said…
First off I want to say that I absolutely HATED the movie. I was so excited for it and they got it ALL WRONG.

I'm glad this one is better than Mini Shopaholic. The last few books haven't been as good as the first few. Not a fan of the cliffhanger ending though...
18 October 2014 at 22:10

Kathryn White said…
The first few books were by far the most enjoyable for me.