Today is my stop on the Reluctantly Charmed blog tour and to celebrate, I'm chatting with author Ellie O'Neill about her debut novel, Irish Folklore and a few other things besides ...

Congratulations on the publication of your debut novel, Reluctantly Charmed. Can you tell me a bit about your journey toward publication? Is writing a novel something that you have always wanted to do?

Yes, definitely.  I had that unscratchable itch that people talk about. I tried hard to develop my voice over the years by writing a lot of short stories and studying and dissecting books that I’d read and loved.  When I got the idea for Reluctantly Charmed I did something that I probably wouldn’t recommend to other aspiring writers, but at the time I felt like I’d nothing to lose, I was single, free and it was pre-recession.  I quit my job in London where I was working in advertising, and moved back home with my parents in Dublin.  I worked part time in a newsagents and focussed 100% on writing.  It was a real privilege to be able to do that, and I’ve my parents to thank for it (hence the book dedication).  It’s as difficult to get published as it is to write a book, although I secretly thought that I might be one of those overnight success stories, I wasn’t.  Getting an agent was a long trawl.  I was swimming in a sea of rejections for a long time, which is difficult to take.  Reluctantly Charmed had become my baby, and it’s hard to hear someone say that your perfect baby isn’t attractive to them.  I toughened up, and often with a rejection can come a critique, and now and again there was some truth to the criticism (as difficult as that was to hear) so I found myself rewriting and redrafting.  I went through two agents in the northern hemisphere, I was delighted to be accepted but then found that there was jarring of opinions on the direction of the book.  I had to stick to my guns, I was confident that the story could be told my way somehow.  I had moved to Australia (that’s a whole other story involving horses, a walk across Spain and a gorgeous man) and Reluctantly Charmed hit a plateau.  It didn’t seem like it would ever get published.  It was very disheartening.  And then out of the blue, came an email from an agent in Melbourne, Jacinta di Mase, who had read a version a year before, and loved it, and was wondering why she hadn’t seen it on book shelves (so was I) I signed immediately.  And Jacinta worked her magic and in the space of five weeks she had publishers vying for it.  It was surreal.  I think timing, luck, a good agent and many rewrites have finally got me to publication day.

Fairies and Irish folklore are major themes in Reluctantly 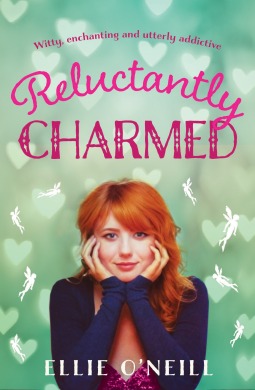 Charmed. Did you have a lot of fun doing the research for the book?

I did.  So many folklore stories are funny and just a little bit crazy.  They’re really entertaining.  I was also really surprised at some of the modern day fairy stories that I came across, like a motorway build in the 90’s in the west of Ireland being diverted because of a fairy bush.  And once I let people know what I was researching I was told a lot of funny stories too about grandparents and fairy rings, and curses.  It’s all told with a wink and a laugh.

Was it fun coming up with each of the seven steps that Kate has to publish to receive her inheritance?

Yes definitely.  My sister helped me with them, she’s a gifted wordsmith.  They’re very much inspired by Yeats and his poetry, and the beautiful world that he creates.  It was important that the steps were a glimpse into the fairy world, they had to feel intimate and secretive.  Also I wanted to convey the duplicity of the fairies, they’re great fun but can be frighteningly evil too.

What soon became obvious to me, as a reader, were the many differences between Kate and the first Kate McDaid aka the Red Hag. In what ways are the two women similar?

They’re not really.  I think their childhoods were similar, very free and easy, but then the Red Hag got taken by the fairies and her life spun out of control from then on, she made her own choices.  And I think Kate has learned from her mistakes.

Initially, Hugh seems like quite an unlikely love interest for Kate and some of their early encounters are quite amusing. Did you have fun coming up with Hugh’s character and in what ways do you think that he is a better match than say, Matthew or Jim?

I love Hugh.  He’s all man.  He is where Kate belongs, even though she doesn’t know it initially.  His love of nature, his affinity with animals, Kate doesn’t realise it at the beginning but this is her natural connection to the world too, and that’s part of her initial attraction to Hugh.  That and he’s gorgeous.  Jim belongs to her past, the city life, materialistic and superficial, the depth of emotions were never there for him that she can have with Hugh.  I’m very fond of Matthew, I thought it was important for Kate to have a straight male friend to give her a different opinion on things, and interestingly Matthew is not as cynical about the fairies as Kate is.  He’s intrigued by them.  I never wanted a romantic relationship between them, he was always a sounding board and a confidant.  And I hate the idea that men and women can’t be friends, of course they can!

Aside from writing, what are some of your hobbies and interests?

I love movies.  My perfect day is two good movies back to back in the cinema with popcorn refills.  I’ll watch pretty much anything, love an action flick, rom com, thriller.  I just love movies.

What are your plans for the future? (In other words, are there any upcoming novels for me to look forward to?)

There is.  I’m working on another book at the moment, which I’m really excited about.  It’s only beginning to take shape so I can’t tell you much about it!

Finally, this one is a signature question that appears on many the author interviews on my blog … Is there anything that you would like to say to your readers in Adelaide, Australia?

Thank you very much for stopping by Kathryn's Inbox, Ellie. I loved your answers as I am sure that many people who are reading this will too. We would love to see you in Adelaide one day. Reluctantly Charmed is available from all good book retailers ... 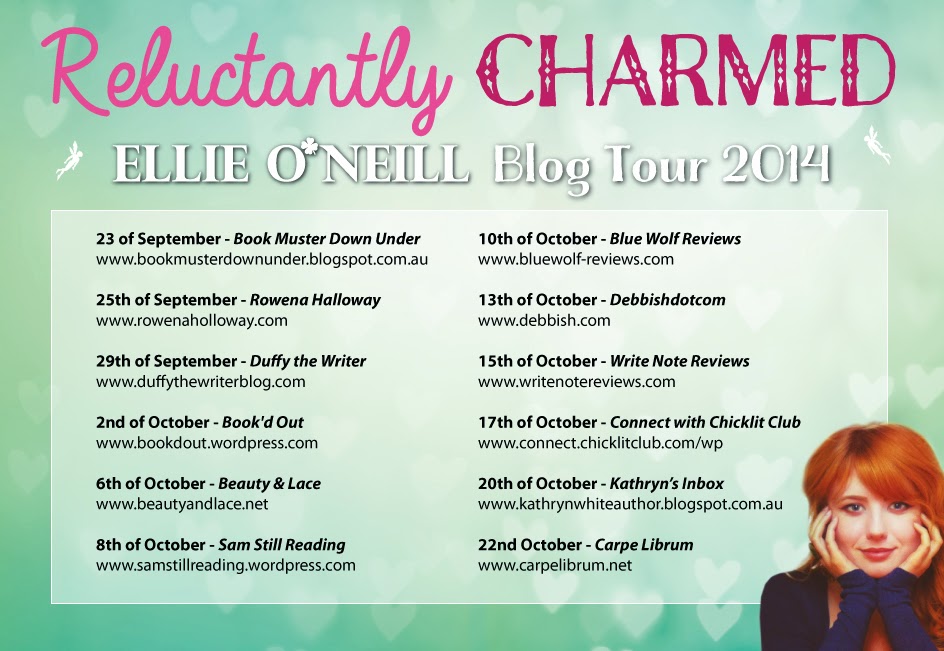 Rowie said…
Another interesting interview Kathryn, and it's nice to get greater insight into Ellie. I'm intrigued to see what comes next from Ellie--and it's always good to know there its light at the end of the rejection tunnel ;)
21 October 2014 at 07:48

Kathryn White said…
Hi, thanks Rowena. I really enjoyed putting this interview together and being able to share it with you all.