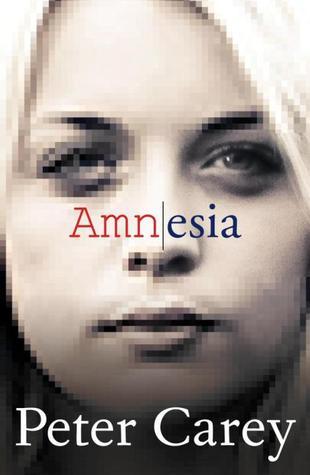 Australian author Peter Carey's latest novel is an interesting take on personal freedom, Australian history and the sometimes uneasy diplomatic relationship that Australia has with America, all written in the authors trademark smart-arsed style, the kind that makes readers either love or loathe this particular author. At the opening of Amnesia young woman from Melbourne, Gaby Baillieux has unleashed a worm into the computerised control system of a number of prisons in Australia, the United States and in other parts of the world. Meanwhile, in Sydney, left wing journalist Felix Moore is being sued for libel for reporting on a rumour. The pair soon come together in the most surprising and perhaps ironic of ways--after Felix is more or less kidnapped and held to ransom until he agrees to write a biography of Gaby Bailliex that will help her win the sympathy of the Australian public (thus decreasing her chances of being extradited to the United States.)

Throughout the narrative Carey retells parts of Australian history that have been forgotten--parts of our collective amnesia--such as the Battle of Brisbane and former Australian Prime Minister Gough Whitlam's relationship with the CIA shortly before his infamous sacking in 1975. (Did the CIA really get rid of Gough? This is a conspiracy theory that I have heard many times, though it was never mentioned when I learned about the constitutional crisis of 1975 in high school ...) It is fitting that these forgotten parts of Australian history are mentioned in Amnesia as each of these events are somehow connected with Gaby Bailliex and her family history. Bailliex herself is a complex character, a young woman who seems to want desperately to be seen making a stand and doing something proactive against things that she believes to be wrong.

I enjoyed reading Amnesia. Although it probably sounds like a cop-out by someone who is unwilling try a little bit harder (and perhaps it is just that,) I strongly suspect that I am not the best or most qualified person to be offering a detailed review. It is a book, I feel, that would be immensely enjoyed by readers who has a strong grasp of Australian history and politics--including some that which is made up of our collective amnesia--and who can bring that prior knowledge with them to the book.

Or maybe in a funny way that is the point--to illustrate how much of Australian history remains unknown to its citizens.

Thank you to Penguin Books Australia and The Reading Room for my review copy.