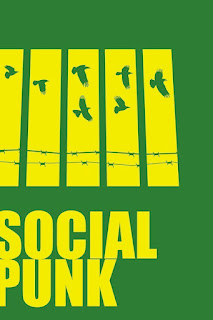 In terms of book blogs, I'm still one of the new kids on the blogosphere, so imagine my surprise, and delight, when I was approached by author Monica Leonelle to participate in the blog tour for her new Young Adult novel, Socialpunk. Monica lives in Chicago and when she isn't writing, works as a digital media stratagist, meaning that she was able to organise a mighty fine blog tour for her new book. Over the past two weeks, I've been following this tour on google and watching as the reviews for her novel have grown. (In fact, if you're an avid follower of book blogs, there's a very good chance that you've heard of Socialpunk already.) Anyway, seeing as the author was kind enough to proved me with a free eBook copy in exchange for an honest review, I'd better do just that ...

Socialpunk
A lively and fast-paced young adult novel, Socialpunk offers two very different dystopian glimpses of Chicago in the future. Ima is a timid young woman who lives in the domed city of Chicago in 2051 with her spineless mother, a father who is abusive in every sense of the word and Dash, the boy she loves, but who cannot love her back as any more than a friend. After escaping an explosion a popular nightspot with the aid of a mysterious hooded figure named Vaughn, Ima finds herself in a very different but equally bleak Chicago--the Chicago of 2198. A much larger shock is in store. The domed city that Ima has grown up in is part of a virtual reality that is scheduled for deletion. Ima must find a way to hide from the government (who would probably destroy her on site if they knew her identity,) and to save Dash and the people that she loves from being destroyed.
I found Socialpunk to be a lively and entertaining read. It was wonderful to glimpse the two different views of Chicago and to follow Ima as she grew from a timid girl to the beautiful and strong willed "Cinder" through the course of this short novel. The authors passion for the genre shows on every page. However, there were a few editing issues that need to be addressed (including some name inconsistencies in chapter 15) and there were some places where I wished the author would show us various things instead of flat out telling is. (As C.S. Lewis once famously said, don't say it was delightful, make us say delightful when we read the description.) Then again, I'm grateful that the author did not go into too much detail in some places, such as describing the abuse Ima suffered at the hands of her father--in this instance to know was enough. The ending, meanwhile, surprised me quite a bit. I'm not sure if the ending is good or bad, or where the author is leading with this one.
I enjoyed reading Socialpunk and am grateful to the author for allowing me the opportunity to review her novel on my site. I look forward to reading the following books in the triology, Socialmob and Socialhood.
Cool Socialpunk Links - What other reviewers are saying:
Book Lover Book Reviews
IceWolf
Misplaced Indulgences
Reading by the Beach
PS - I'll be interviewing Monica Leonelle later this week.
Monica Leonelle Socialpunk