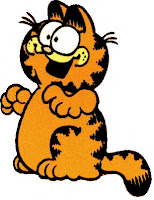 Today I am focusing on one of my favourite comics the long-running Garfield strip. (For more on my love of comics click here.) For those of you who don't know, or perhaps have never cared to find out, the Garfield comic debuted on June 19, 1978 and is set in Muncie, Indiana. The gags are fairly simple, revolving around a fat, sarcastic cat with a penchant for eating food and his hapless owner Jon Arbuckle. The comics fit in with the standard newspaper format - three panels six days a week and a larger Sunday comic. The weekday comics typically feature a single theme that is played out over the course of a week, while the Sunday comics tend to be self-contained, brighter and tend to rely on visual comedy, rather than wit.  As the strip has now run for over 30 years, the animation and number of characters have changed over the years. The original Garfield was considerably tubbier, grouchier and quite possibly had more stripes than his modern incarnation. See: