Of A Boy - Sonya Hartnett 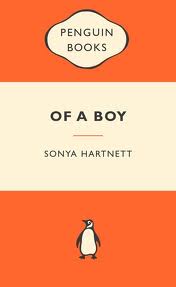 It is difficult to know what I should classify this book as, exactly. Written in 2002, Of A Boy appears in the adult fiction section of my local library and, likewise, in the adult book department at Dymocks. On the other hand, the protagonist is young and the writing simple enough that the story should be understood by a reader in his or her early years of high school. To add to the confusion, the copy that I actually own is one of those popular penguin paperbacks, suggesting it has already reached 'modern classic' status. And then there is the fact that the book won The Age Book of the Year and the Commonwealth Writers Prize in 2003 and was shortlisted for the Miles Franklin Award and the New South Wales Premier's Literary Awards that same year. So please do forgive me for being a little confused. Or perhaps I should just tell you about the book.

I purchased this one in 2009. At the time, I had just read Alan J. Whiticker's biography of the Beaumont children and their disappearance, which is one of Adelaide's most famous mysteries. (In a nutshell, three children disappeared on their way home from Glenelg.) The story of the Beaumont children was interesting to me for a number of reasons--partly due to the fear that it could have happened to anyone, and partly because in 2009 every day I was traveling on bus route 265 from Brighton to Glenelg, the same bus route that the Beaumont children were supposed to have taken home that Australia Day more than forty years earlier. Anyway, Of A Boy starts out with a similar premise. The year is 1977 and the three Metford children have vanished from nine-year-old Adrian's neighbourhood while they were on their way to buy ice-cream. Of course, the era and Victorian setting are different to the time and place when the Beaumont children disappeared, but the similarities are there. Adrian, an imaginative, introverted child, is obsessed by the mystery surrounding the disappearance, though his mind is too young and innocent to know what has probably happened to the children. To him, they have vanished to a mysterious far away place. This takes up his mind for many hours at school and during his long evenings and weekends outside. Adrian is an unwanted child. His mother can barely care for herself, let alone a child and his father simply does not want him. Instead he has been sent to live with his Grandmother, Beattie, who does not welcome the opportunity to be a parent again. She loves Adrian as a grandchild, but not to the point where she wants to take on the role of a full time, single parent, as this quote shows:

"I thought if I lost the three of you that way - that certainly would have killed me. I would have fallen down and died. But you don't die for other people's children - only for your own. I love him of course, I'll love him and protect him and keep him and do whatever needs doing to get him grown; I wouldn't let him be hurt or lost, he's a part of me but I know that he isn't mine." (p.151).

Neither Adrian's Uncle Rory or Auntie Marta are willing to step up to the role of parent. All three believe that Adrian is too young to know or understand their feelings and appear to be oblivious to the fact that Adrian is a sensitive child. Adrian is sent outside of the house to play often. It is here that he makes friends with an older girl named Nicole. Nicole's mother is dying and she too, is often sent out of the house so that she does have to say or hear anything that her parents do not want to explain. Nicole and Adrian have an uneasy friendship. To Adrian, Nicole is older and wiser and is able to answer his many questions, including the whereabouts of the Metford children. Nicole leads Adrian across town, where she promises that the Metford children will be. Eventually Nicole slip while walking across the pool in the town square--it is the middle of winter and the pool is covered. She drowns, as does Adrian when he attempts to save her. The novel ends with Beattie and Nicole's father realising that the children are missing.
Of A Boy is a novel that is on one level very simple, and on another level is quite complex. It could be read as a tale of what happens to a missing child. Looking deeper, the ending is quite ironic. Adrian is an unwanted child. He only becomes wanted by Beattie after he disappears and she contemplates the possibility that he has met with foul play, thus contradicting her earlier statement. And then, of course, there is the fact that Nicole and Adrian have died during misadventure during their attempt to find three other missing children. Like many of Hartnett's novels (Butterfly or Sleeping Dogs) the novel highlights some of the more depressing aspects of childhood and the difficulty children can have fitting in with the adults around them. Overall, not a bad book, but certainly not an uplifting read. And we never do find out what happened to the Merford children.
Of A Boy was published internationally as What the Birds See.
Of A Boy Sonya Hartnett