The Evolution of Mary Anne Spier

April 15, 2012
You know, sometimes I waste far too much time pondering about the things in life that aren't really important. Like how come Mary Anne Spier from The Babysitters Club is generally considered the least popular character of the series. Now, I think that Mary Anne Spier is awesome. Okay, she may have been a sooky lala who burst into tears at every opportunity and she certainly wore some strange outfits (but hey, Mary Anne's clothes were nothing compared to the weird shit that was worn by Claudia,) but Mary Anne was also the first to get a steady boyfriend (and she told him to get bent when he became too controlling,) lived in a haunted house (okay, Dawn lived there first,) and she was the only member of the group who appeared to be capable of standing up to the others and who could make friends outside of the group. And she managed to do all of this while being an all-round nice person. It was never Mary Anne who bitched or moaned about the other girls, even though she had to constantly listen to the crap that they told her about their troubled personal lives and problems that were all of their own doing anyway. But what the members of the Babysitters Club, and many fans may not have realise is that Mary Anne was also an expert master of disguise, whose physical appearance changed radically over the course of the series. Today, Kathryn's Inbox lifts the lid on the quiet evolution of Mary Anne Spier ... 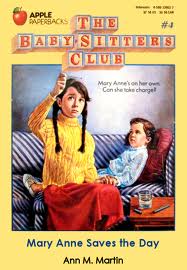 This was Mary Anne when readers first met her. A shy, dowdy 12 year old, who had just told her three best friends from the Babysitters Club to get stuffed after they were mean to her. There was also some problem with a strict father who, inexplicably, insisted that she wear her hair in two long braids. (Much like Wednesday Adams.) Mary Anne showed everyone what she was made of by making friends with a new girl at school called Dawn and proving that she was a kick arse babysitter by rushing her charge to the emergency room when the girl became seriously ill. Her father realised that she was becoming too old to push around and lifted his restrictions on her hairstyle. The Babysitters Club then reformed and Mary Anne insisted that her friend Dawn become a member.
2. Teenage Mary Anne, age 13, circa 1988 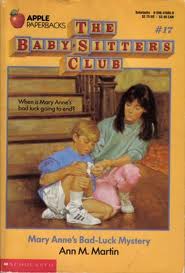 In this incarnation, Mary Anne looks like an ordinary teenager from that era. This time, there is a problem with someone sending bad luck charms and anonymous notes made from cut out letters, but Mary Anne and her friends soon outsmart the perpetuators - a group of mean girls from Stoneybrook Middle School whose leader is intent on stealing Mary Anne's boyfriend.
3. Sex Bomb Mary Anne, age 13 circa 1990. 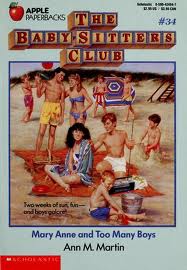 In this incarnation, Mary Anne escapes her strict father, finds a bikini and heads to the beach, where practically every boy she meets falls in love with her. Which leads to our next incarnation ...
4. Mary Anne Gets Knocked Up by Ben Hobart, Moves to Noarlunga and Gets a Single Mum's Pension, circa 1992 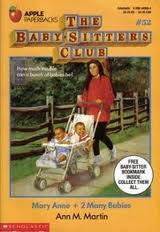 Title says all. Oh, and this one came with a free bookmark. I lost mine.
5. Mary Anne's Makeover, circa 1993 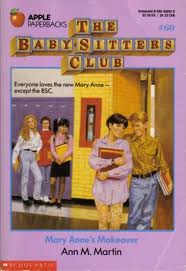 Leaving Noarlunga and the single mother incident firmly behind her, Mary Anne returns to Stoneybrook, where she gets a haircut and some strange looking tights. Even so, the members of the Babysitters Club have some difficulty welcoming her back into the fold.
6. TV Star Mary Anne, circa 1993 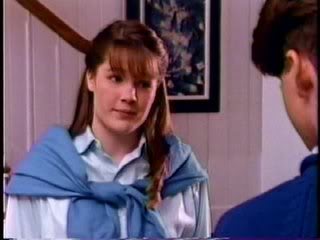 Mary Anne as she appeared on the Babysitters Club television series. Sweet and preppy ... if only everyone knew the truth.
7. Mary Anne goes international, circa 1994

In this one, Mary Anne visits England, where she shacks up with a shady importer of electrical goods called Tony. They live happily together in a flat on the Larkmede Estate along with a pile of stolen toasters, but Mary Anne is arrested and taken to the Sun Hill police station by WPC June Ackland after writing BSC Friends Forever on the stairs of the estate. She is subsequently deported.
8. Movie Star Mary Anne, circa 1995 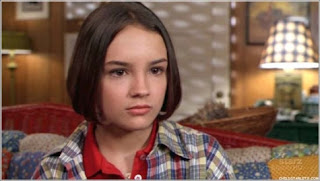 Shortly after being deported made her motion picture debut in The Babysitters Club Movie. The girls from the club actually stayed at Dawn's house in California and commuted every day to Hollywood in a minivan driven by Kristy's stepfather, Watson Brewer, while they made the movie. No one knows that it was Mary Anne who put sugar in the fuel tank, so that she could play hookey from making the film one day and hang out inside Cam Geary's house. Later, Cam tried to sell the photographs to a popular celebrity magazine, but Watson Brewer bought them for the sum of one million dollars. Kristy destroyed all but one photograph that Watson was mysteriously unable to find.
9. Mary Anne Take Two, circa 1998 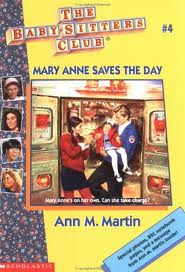 After the Cam Geary photograph incident, Mary Anne was ordered by her strict father to pull her head in. She began braiding her hair once again, but this time she wore a slightly shorter skirt.
10. Mary Anne's Revenge, circa 2000 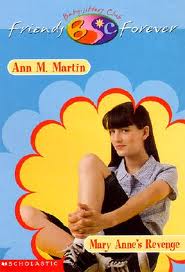 We get the impression that Mary Anne isn't too happy about her new squeaky clean image. Just look in the eyes. What could she planning this time ...
Mary Anne Spier The Baby-sitters Club