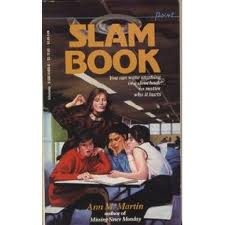 Some fans of 1980s nostalgia may not be so surprised to learn that Ann M. Martin, the author of the infamous Babysitters Club series also wrote four novels for young adults in the 1980s. Walking where the likes of Claudia Kishi and Mary Ann Spier would never dare tread, Slam Book tells the story of how a silly teenage prank ends in tragedy.

To give some background to the story, in the 1980s Slam Books were the great fear of parents of high schoolers everywhere. (These days, websites like facebook and formspring are subject to the same kind of scrutiny.) The books were basically a notebook that listed the names of every student in the class/grade/school. Beneath the name of each student, there was a space where his or her peers could write anonymous notes stating what they really thought about him or her and, consequently, could be used for bullying often with tragic consequences. Mentions of them have turned up in popular culture on several occasions (there was a Sweet Valley High book about them,) most recently in the film Mean Girls, where the Slam Book is known as a burn book.

Anyway, Slam Book by Ann M. Martin tells the story of Anna. Anna, is basically a good kid. She's loyal to her friends, studies hard and likes to have fun. She also desperately wants to fit in and be part of the popular crowd at her high school. And so she decides that a slam book (a notebook with a page for each student, where his or her classmates can write what they really think about them,) is her gateway to popularity. And it's all good until Anna uses her book play a prank on a unpopular girl from a poor family, which ends in the tragic suicide of one classmate and an attempted suicide of another.

Slam Book is an interesting read about teenage behaviour and a young woman's discover of how her actions can have a serious impact on others, though some of the issues of bullying and how Cheryl's suicide could have been prevented seem to be glossed over. The novel ends on a haunting note, with Anna realising that adolescence is not going to be easy.

Ann M. Martin's other novels for young adults are Missing Since Monday, Just a Summer Romance and With and Without You.
Ann M. Martin Slam Book Sweet Valley High

Anonymous said…
Gday. I noticed your website title, "Blogger: Kathryn's Inbox" does
not really reflect the content of your website. When writing your site title, do you
believe it's best to write it for Web optimization or for your viewers? This is one thing I've been struggling with simply because I want
good rankings but at the same time I want the best quality for my visitors.

Kathryn White said…
G'day. I'll name my blog whatever the fuck I please. Thanks for the spam. Here is a taste of my preferred variety: