Review: The Understudy by Julie Bennett 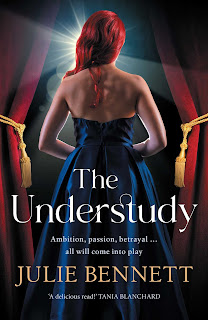 Australian author Julie Bennett leverages on a unique childhood experience working as a child extra onstage at the Sydney Opera House to create a dazzling (and entirely fictitious,) story set during the grand opening of the Opera House in 1973.

Sophie is a young aspiring singer, with a part in the chorus for the grand opening of the Sydney Opera House. She is also in an enviable position, chosen to be the understudy for the female lead in the opening's performance of Madame Butterfly. But Margaret Gardiner, Australia's premier female opera star would never miss such an important occasion, would she? And nothing could possibly happen ... could it? When Margaret suddenly disappears just before opening night, Sophie finds herself thrown into the lead role, and into the arms of her leading man. But what happened to Margaret? Who is pulling the strings? And just how much does Sophie know, really? Ambition can be deadly.

This was an enjoyable read, set during the opening of one of Australia's most iconic places. Love it or loath it, the Sydney Opera House is an important part of our history. The novel also touches on the huge changes that were happening in the eastern suburbs of Sydney at the time, with ordinary people and homes being moved out to make way for new developments. The real story, of course, is that of Sophie and Margaret, two women born a generation apart who are both alike in their ambition. I suspected early on that Sophie may not have been as innocent or honest as she seemed, but Margaret's part of the story had a few more twists ... just as it was interesting to see who was really pulling all the strings.

Overall, this was an entertaining read.

Thank you to Simon and Schuster Australia for my ARC of The Understudy.

Kathryn White said…
You're more than welcome Julie. I loved it and I feel sure that it is going to win the hearts of many, many readers.
3 March 2022 at 21:40