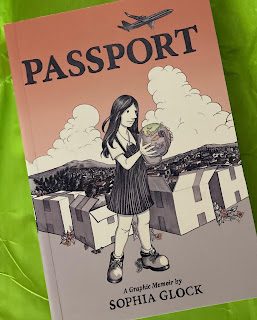 Sophia Glock's graphic memoir Passport tells of an unusual childhood. Born in the United States, to American parents, she has spent most of her childhood living in various countries because of her parents jobs ... not that she knows what they do for a living, exactly. Her parents are the ultimate masters of deflecting and not answering direct questions, and they encourage their six children to do the same. By the time Sophia is in her teens, she and most of her family are living in Central America. It's a lonely life for Sophia, who finds herself being uprooted from schools constantly, and never really able to make friends. Things take a turn for the worse when her beloved older sister Julia leaves the family to go to college in the United States. Her current school is a drag, Sophia feels as though she is merely tolerated by the kids in her friendship group, who can be mean at times. Her parents have some strict rules, and seem bizarrely overprotective in some ways. And the boy that she is crushing on doesn't seem to like her back. Then she inadvertently discovers the big family secret. Her parents are living double lives, and are Intelligence Officers for the CIA. Suddenly, Sophia's world is thrown into a spin, and with it she is trying to navigate the harsh realities of adolescence and high school life ...

I found this one to be intriguing. It's also sad, and quite heartbreaking in places. Glock perfectly captures the sense of loneliness and isolation that she must surely have been feeling at the time, along with the complexities of high school--toxic friendships, a crush that ends badly and feeling as though she never quite fits in. The illustrations are quite effective and I like her style.

This was not an easy read, but the journey is more than worth it.