Review: This is Not a Love Song by Amber Petty 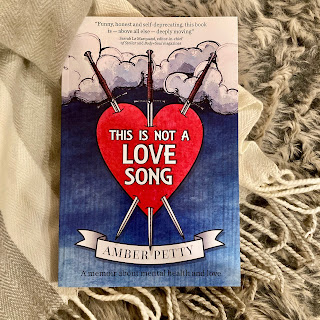 Many Australians will be familiar with Amber Petty. She was, most famously, bridesmaid at the wedding of Princess Mary and Crown Prince Frederick of Denmark and worked in PR and had been an executive at Mushroom Records. From there, she had a series of enviable, high profile jobs, working in women's magazines, was a contestant on Celebrity Survivor, co-hosted a top rating breakfast radio show, and now runs a successful podcast. It's a dream life, surely? Well, kind of. In her memoir This is Not a Love Song Amber Petty details what went on behind the scenes, from toxic relationships to being used for gossip about her best friend, to a 'gotcha call' on breakfast radio that ended in a cat fishing scam no one saw coming. She also takes a careful look at her family relationships, particular that with her father, who left the family and moved to another state when Amber was just a year old.

Amber Petty's memoir is honest and, occasionally, heartbreaking. She details her childhood, growing up with one parent living interstate who she and her brother would only see in the school holidays, during an era when not many kids had parents who were divorced. However a good chunk of the novel concentrates on what must surely have been a horrific experience. While she was co-hosting the breakfast show on SAFM, a top rating commercial FM station in Adelaide, she and her co-hosts were catfished by a lone co-artist from Canada, who befriended the hosts, and then pretended to have cancer for financial gain. And not only that, the scammer then travelled from Canada to meet them, and actually stayed in Amber's apartment. The betrayal, conning money out of the public, and then coming out to meet the people she had catfished is utterly shocking. But Amber's time in radio isn't just defined by that. Amber is unflinchingly honest as she details the realties that she faced working in the cut-throat world of commercial radio.

The later part of Amber Petty's memoir, and perhaps the most important of all, concentrates on her family relationships as she looks toward the future. Overall, I found this to be a raw and compelling read, and an insight into someone who has clearly lived an interesting life and learned some big lessons along the way.

Amber Petty This is Not a Love Song