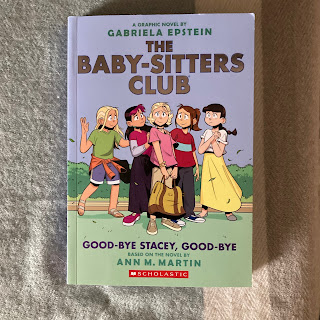 The BSC Graphix series continues to go from strength-to-strength. The series is now up to its eleventh graphic novel adaption of Ann M Martin's utterly beloved series, The Baby-Sitter's Club. This time around, it is book thirteen of the original series getting the graphic novel treatment.

Things are looking up for Stacey McGill. She has lived in Stoneybrook for a bit over a year now. She has a best friend in Claudia, and close friends in all of the other members of the Baby-Sitters Club. She has watched as her favourite sitting charge, Charlotte Johansson has bloomed into a confident kid and sometimes, the pair, who are both only children, feel like sisters. Then Stacey's parents make a surprise announcement. The family is moving back to New York ...

The announcement leaves Stacey with mixed feelings. She misses New York, especially now that she's made up with her childhood bestie, Laine. But things are going to be tough if she moves back. After all, there were plenty of other kids at her old school and in her old neighbourhood that bullied her. And she is going to miss Claudia, the Baby-Sitters Club and Charlotte. Meanwhile the other members of the BSC are struggling to think of a fitting farewell for Stacey. Can they give their friend the send off she deserves ... BSC style?

To be honest, I was surprised that this one was adapted as a graphic novel. The series has already introduced junior sitters Jessi and Mallory early--in the originals, they joined the BSC as replacements for Stacey and not without controversy. Mallory was the victim of bullying from the older girls (addressed in book five of the graphix series,) and Jessi experienced racism at school. Also Ann M Martin later said in interviews that writing Stacey out of the series early on was a mistake and that she was brought back at the earliest opportunity. (In the original series, Stacey narrates book 18 which is set in New York, visits the others in book 24 and attends the same summer camp in the second super special, before returning for good in book 28.) Anyway, the fact is, this is an actual title in the series and, although sad, it's a fun read. As always the BSC bind together first to help Stacey with a yard sale, and then to throw her a surprise party.

Overall, this is a fun read and a worthy instalment in the series, one that will be equally loved by the target audience and by adult readers who are looking for a healthy dose of nostalgia.

PS: According to BSC wiki there are two more BSC graphix novels in the works--Jessi's Secret Language and Mary Ann and the Bad Luck Mystery ... which leads me to another mystery. Why is this series consistently skipping Dawn's books? Granted, I think that Jessi's Secret Language is perfect for the format, and a little bit more marketable than Little Miss Stoneybrook ... and Dawn (beauty contests, who needs em,) but what about The Ghost at Dawn's House? The secret passage that led from Dawn's bedroom was a huge part of the series as BSC folklore. Maybe one day ...

Lorrs said…
Mallory has it even worse than Dawn, she got no episode in the Netflix series and no graphix yet either (of course Hello, Mallory wouldn't make sense as they already covered most of that earlier, like you said)

Still it is strange they've skipped over a couple of Dawn books, they were some of my faves when I was younger.
1 March 2022 at 01:25