Review: My Mess is a Bit of a Life by Georgia Pritchett 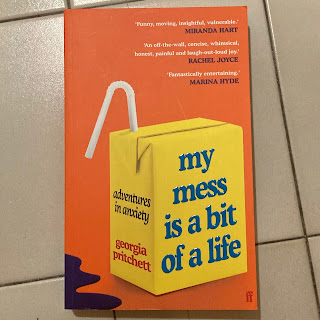 Startlingly frank, My Mess is a Bit of a Life is the memoir from screenwriter Georgia Pritchett. Pritchett, who has won multiple awards, has worked on television comedies such as Miranda, Smack the Pony, Veep and most recently, Succession, where she works as a writer and co-executive producer. She also happens to suffer from anxiety. My Mess is a Bit of a Life stemmed from a visit to a therapist. During the visit, she found herself unable to articulate her thoughts. Her therapist suggested writing them down instead. And what she produced was just so amusing, bloody interesting and such an excellent insight into what it means to be living with--or in spite of--anxiety that it has found its way into print.

Told in a series of mostly time-ordered vignettes, Georgia tells of her first experiences of anxiety in childhood (worrying that the monsters under her bed might not be comfortable enough,) attending an alternative school, and events that would be truly frightening--such as when on the way home from school her brother was held hostage at knifepoint. (And what she remembers most about the trip to the police station afterward.) The reader also learns of her experiences working in a field mostly dominated by socially awkward men, who would much rather be around other socially awkward men. Then there are her heartbreaking experiences of IVF, miscarriages and the challenges of raising a child with autism, along with her partner, who she calls The Moose. And although this volume has the potential to be more miserable than the average misery memoir, Pritchett manages to tell all in a way that is truly and genuinely funny. Certainly it has its dark moments, and dark humour to go with it, but this book really shines when it takes the worst of what life can throw at someone, and laughs at it.

Overall, My Mess is a Bit of a Life is an entertaining read, and will likely appeal to a broad audience whether they be looking for an insight into anxiety, or a bit of a laugh. Much like Hyperbole and a Half, this offers an insight into mental illness in a way that only someone who is living through it can.

Georgia Pritchett My Mess is a Bit of a Life