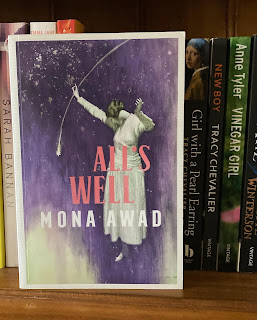 Mona Awad's latest offering is a brilliant satire on Shakespeare, theatre and campus life. Miranda Fitch has been living a real life nightmare, stuck with chronic pain, caused by a fall that put an end to a promising career as an actor. Botched surgery, and dubious medical treatments have only increased the pain. Her husband has abandoned her and though she is trying her best, she is close to losing her job as a drama instructor at a local college. There, she is determined to put on a performance of Shakespeare's All's Well That Ends Well, but she faces a mutinous cast who are equally determined to put on Macbeth instead. Add to it a very annoying colleague who will do anything to get Miranda's job, and the whole thing suddenly seems impossible ... doesn't it? Enter three mysterious benefactors, and suddenly Miranda's fortunes are turning around. But at what cost?

At times hilarious, a little wicked and reminiscent of Margaret Atwood in the best kind of way, this is a story of revenge and how it can so easily go wrong. On a more serious note, it makes an important statement of just how dismissive we can be when others, particularly women, are experiencing chronic pain. I enjoyed the hate-hate relationship between Miranda, who knows just how unfair the world can be, and Briana, a young and spoiled student used to getting her own way.

I absolutely enjoyed this one. All's Well is a delicious black comedy--dark, insane and utterly bewitching.

Thank you to Simon and Schuster Australia for my ARC of All's Well.