Review: Redhead by the Side of the Road by Anne Tyler 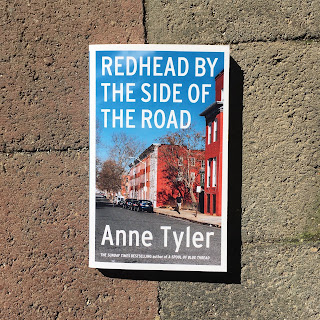 What do you do when everyone else seems just out of reach? Micah is a man in his forties who has his own way of doing things. He is intelligent, basically reliable and runs his own successful business. He also lives a very regimented and ordered life, and has difficulty communicating with, and relating to others. Even the people who care about him consider him to be well, a bit odd. But when a teenage runaway lands on his doorstep, and his lady friend breaks up with him, Micah finds himself stuck in a situation that he seemingly cannot handle.

Redhead by the Side of the Road is a sympathetic portrait of a man who is slowly coming to realise the difficulties he has communicating with and relating to others, and what he does about it. Told over the course of a week, we see the communication difficulties he has with his lady friend Cass, when she starts dropping a whole lot of hints about moving in together that Micah fails to pick up on, and then their eventual break up after a turn of events leads Cass to believe that Micah is dropping some hints of his own. Of course, he isn't, but what he eventually does about it and what the future may hold for him and Cass is more or less the point of the story.

Although short, this one certainly left an impact on me. Anne Tyler paints an empathetic picture of Micah, a man who is just trying to make his way through life, and this feels more like a celebration of the things that make people unique, rather than a cookie cutter depiction of say, autism, or obsessive compulsive disorder. It isn't a book that makes someone's disability into a love story. It's Micah's story and it's damn interesting.

Redhead by the Side of the Road was long-listed for the 2020 Booker Prize.

Anne Tyler Redhead by the Side of the Road