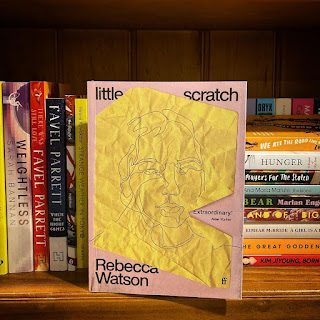 Painfully realistic Little Scratch tells the story of one day in the life of an unnamed woman. As she struggles through her day, a little scratch keeps rising to the surface, quietly reminding her of what has been going on beneath the skin, the memories of something dark that happened recently, that she is trying to forget, but that she knows that she must acknowledge.

The most remarkable thing about this one is the story telling. Not quite a stream of consciousness, the author uses single words, fragments rather than sentences and anything else that comes to hand to describe every event that occurs in the protagonists day. The storytelling is clever and deceptively simple. It also leads to places that are ... well, let me put it this way. A few pages in we get a description of what the protagonist calls her post hangover poo. So, I guess, instead of a warts and all account of her day, we get a poo and all account. It may be a highly effective narrative tool to show the reader the sheer intimacy of the account we're going to get in the pages, but I can't say that I enjoyed reading it. (How daring! How intimate! She poos!) And it's also to the detriment to the rest of the book which covers quite a serious topic that I've just spent nearly half a paragraph discussing the scene.

As stated, we get an imitate glimpse of her day--her commute to work, her interactions with her colleagues, including a boss who immediately seems suspect, and the many grabs for happiness that she makes, in spite of the terrible thing that has recently happened to her, and that she is still trying to process.

Overall, this is a work of Literary fiction, written in a highly effective though experimental style that will readers will either love or hate, with few sitting on the fence. For me, it was enjoyable for something different, though I could see some of its failings. While I have no doubt that it is clever, I don't think that it quite reaches the level of brilliant that is suggested on the back cover.