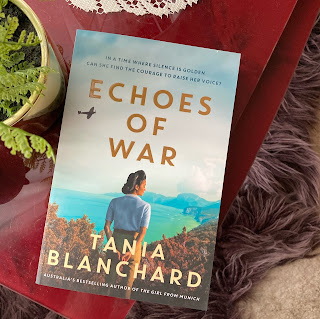 In the past few years Australian author Tania Blanchard has seen enormous success with her historical fiction, telling the stories of the real people caught up in pivotal moments in the twentieth century and the impact that is has on the character, and their family. In Echoes of War she turns her focus to Italy. The year is 1936 and Giulia is a headstrong teenager who desperately wants to follow in the footsteps of her Nonna and become a healer. Unfortunately for Giulia, her equally headstrong father wants nothing more than to see his daughters married and living respectable lives. A small deception helps Giulia get the training that she longs for, but it isn't long before life, and the realities of the era--civil unrest and war--soon get in the way. Giulia finds herself bound to her family and duty in ways that she never thought was imaginable.

Although I have enjoyed some of Tania Blanchard's work in the past, I did not enjoy this one anywhere near as much as I had hoped to. I found it difficult to connect with the heroine and many of the situations felt cliched and without giving away any spoilers, melodramatic. That said, I appreciated the historical aspects of this novel, and the glimpse of what life was like in Italy during the Second World War, something that we don't always see or hear of very often in Australia, in spite of the influx of people from Italy to migrated here after the war. (It was, I suppose, a terrible thing that many of the generation who lived though it wanted to forget.) The story also touches on the heartbreak that comes with moving to a new country, and having to say good-bye to family members, and handles it realistically, which redeems some of the earlier melodrama.

Overall, this wasn't a perfect read for me, or perhaps just not the right book at the right time, but that would not put me off reading more of Blanchard's work in the future.

Thank you to Simon and Schuster Australia for my copy of Echoes of War.