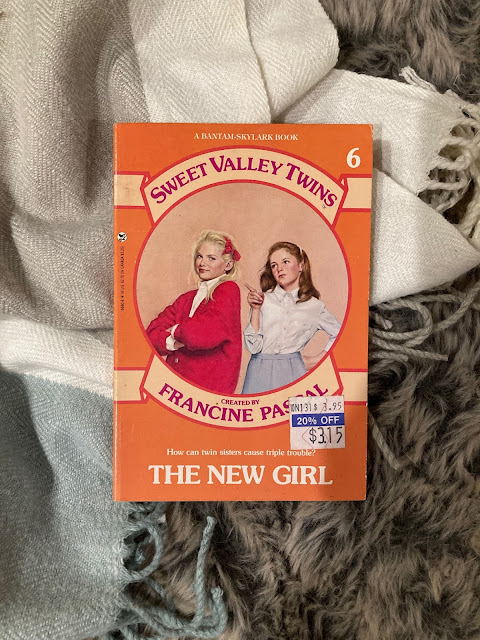 Sweet Valley Twins #6
The New Girl
The early Sweet Valley Twins novels had some fun storylines that never take themselves too seriously. In this one, a new girl called Brooke moves to Sweet Valley from France. Her Dad is somehow acquitted with Mrs Wakefield and the twins and Brooke are more or less thrown together ... and they don't get along. Brooke is bossy, spoiled and mean. She soon rubs all of the other kids at Sweet Valley Middle School up the wrong way and they decide to teach her a lesson, which involves Elizabeth and Jessica pretending that they have an identical triplet named Jennifer. There are all kinds of reasons why this would never work, but Brooke is fooled and well, Sweet Valley chaos ensures ...
This one was an entertaining, though highly implausible read, making it an excellent instalment in the series. The trick is exposed, of course, and Brooke eventually turns good, though she never quite makes Unicorn status. A minor character who appears only in Sweet Valley Twins, Brooke gets another story arc later in the series where her mother returns from France and it is revealed that she is none other Coco, an up and coming pop star, who expects Brooke to lie about their mother-daughter relationship. (It's little wonder that Brooke is the way she is.)
Greetings From the Unicorner