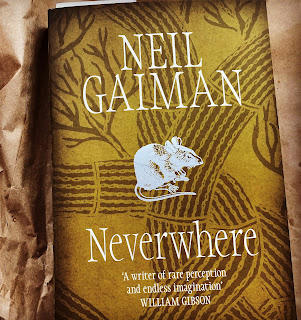 Imagine that there is a whole other world below the city of London. A world filled with all kinds of people. Monsters. Saints. Murderers. Angels. And more. Imagine that it is a city filled with people who have, in one way or another, fallen through the cracks. That world exists within the pages of Neverwhere, a brilliant novel by Neil Gaiman.

Richard Mayhew is a big hearted and somewhat passive young man who moved from a small town in Scotland to London. He has enjoyed some success as a businessman and seems to enjoy, somewhat, being pushed around by his fiancé Jessica, a bossy and ruthless go-getter who really isn't his perfect match, but Richard can't see that, even if the reader can. Anyway, against Jessica's advice, Richard finds himself coming to the aid of a young woman he finds on the streets. This simple act of kindness propels Richard into the world of London below, where he finds himself on a twisty and occasionally frightening adventure  to help his new friend and to, hopefully, find his way back to London Above ...

This was an excellent, entertaining read and my only real complaint is that at some point, the story was eventually resolved and the book ran out of pages and I had to stop reading it. Neil Gaiman is always at his best when he blends fantasy and horror with humour and larger than life characters, and Neverwhere has this in spades. Richard is an easy character to identify with, in particular during his well, existential crisis, in scenes that feel very familiar, even though absolutely nothing of a similar nature has happened to me, except perhaps metaphorically. And speaking of metaphors, the novel itself serves as a metaphor for the way those who do find themselves homeless or alone in some way, are treated. (Spoiler: not very well.) I also loved a number of supporting characters, in particular the Marquis, while characters like Croup and Vandemar make for the perfect pair of hapless, selfish villains.