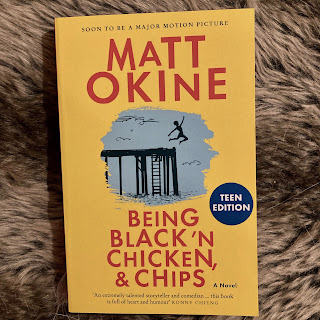 Australian comedian Matt Okine leverages on his real life experiences to create a novel about a young man who is just trying to grow up and fit in, all while his mum is dying of cancer.

The year is 1998 and Mike has just started high school in a city called Brindlewood that shares more than a passing resemblance to Brisbane. Mike's mum is white and something of a social justice crusader (the good kind,) and his dad is black, African and works as a school dentist. (Basically, he travels around in a fully equipped van doing school visits. Mike finds this slightly embarrassing.) What Mike wants more than anything is to fit in, for his crush to like him and to take part in a school sports tournament. Unfortunately life has other plans. His Mum has cancer. Mike doesn't want people to know, or to feel sorry for him. But he does want to get things right and to make his mum proud, but the reality is, he's just a kid, some things are out of his control, and other things he doesn't get quite right. And endings aren't always happy.

This was an entertaining enough read, about a kid who is struggling not only under the weight of being a kid, but under the weight of a whole lot of other problems that he solves in a way that only a teenager can. It's a great book to pass on to a teenage boy, though it also has a level of depth that means that it can be enjoyed by adult readers. (Note: the original version of this novel was intended for adults. My version is a teen edition, which has cut down on some of the swearing and dick jokes.) My only real complaint about this one was that it seemed strange to fictionalise such a well known city as Brisbane, but I suppose the author had a good reason for doing so.

This book counts toward my goal for the Aussie Author Reading Challenge 2021.