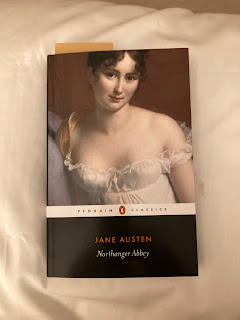 I had so much fun reading There's Something About Darcy last week that of course I had to follow it up by reading a Jane Austen novel. This time around, I decided to turn my attention to Northanger Abbey, which I had not read since I was nineteen, and was the Austen novel that I remembered the least about.

Although Northanger Abbey was written in 1803 and later bought by a publisher, the novel itself was not published until after Austen's death in 1817, along with Persuasion. (Random Austen fact: only four of her novels were published in her lifetime, Sense and Sensibility, Pride and Prejudice, Mansfield Park and Emma.) It turns out there is a reason for that. Although Northanger Abbey is an entertaining read, it fails to make the impact of some of Austen's other much loved novels.

The novel opens with a character who is innocent and, as the author is at pains to tell us, unremarkable. Despite being unremarkable, Catherine Moreland, who comes from a big family who are by no means destitute but are hardly rich, finds herself being taken away on a trip to Bath by a wealthy childless couple, where she soon falls in love with Henry Tilney, and makes friends with Isabella, a scheming socialite who mistakenly believes that the Moreland's are rich and who conspires with her mother and brother to secure an engagement with Catherine's older brother, which ends badly for obvious reasons. Anyway, while she is in Bath, Catherine is introduced to Gothic novels, which is fitting as the whole story is basically a satire on the famous gothic novels of the era, in particular the second half, where Catherine is invited to stay at Northanger Abbey and becomes convinced that something spooky is going on in the house. The ending is quite deliberately a little too neat and points to the author's talent for satire.

Northanger Abbey is less entertaining than much of Austen's work. Austen is always at her best when she is sending up manners and human nature. This is more of a send up of some of the books she has read. It's not a bad read by any stretch--after all, this is an Austen novel--it just isn't anywhere near as interesting as say Emma, or Pride and Prejudice.

Recommended, but if this is your first Austen, I highly recommend reading her other novels first.

Anonymous said…
Wow. How disappointing. I love Northanger Abbey -- in fact it is my favourite of the canon. I do realize that more readers dislike it than like it, and am always sad to read negative reviews.
20 October 2021 at 23:46