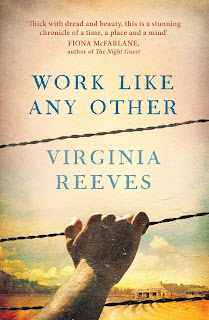 Family, guilt and trying to find a sense of self are the major themes of this beautiful but occasionally morally complex debut novel by American author Virginia Reeves. Roscoe T Martin is a qualified electrician, living in Alabama in the 1920s, who loves his work. Things change when he and his wife inherit a farm from his wife's parents. The farm isn't going so well; Roscoe hates the long and difficult work, but he has a plan--one that is not strictly legal--to modernise the farm so that it can use electricity. While his plans initially do what he intended--to save the farm and his marriage--they soon come at a huge personal cost and Roscoe's life is thrown into disarray, with each turn more miserable than the next when he is arrested and convicted for manslaughter and sent to prison.

I was pleasantly surprised by how much I enjoyed this one. The story was complex in a number of ways--it was not just the story of how one man went to prison, but also the story of the breakdown of an already failing marriage, of the way prisoners were treated differently depending on their race (while Roscoe goes to prison, Wilson his somewhat unwilling accomplice who worked on the farm is sentence to work as what essentially slave labour in a coal mine and thereafter no one in the government seems to have a record of his whereabouts.) Most of the story, but for a few chapters, are told from the perspective of Roscoe, and I found it hard to get much of an understanding of Marie. While her reasons for not being able to forgive Roscoe are clear and understandable, and certainly her treatment of Wilson and Moa is commendable, I found it difficult to retain any sympathy for her once a certain deception was made clear to the reader, and felt that her actions moved from seeking justice to vindictiveness. But then again as a reader, I've spent so much time watching Roscoe suffer and grow that my viewpoint is probably biased. Or maybe it does raise the question--how much punishment is enough?

Virginia Reeves will be appearing at Adelaide Writers' Week on Sunday 28 February at 12pm on the West Stage and again on Tuesday 1 March at 12pm on the East Stage, as part of a national tour.