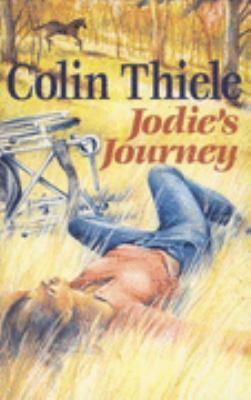 Growing up in Adelaide in the 1980s and 1990s it was impossible not to have heard of Colin Thiele. The former schoolteacher had become one of the states most successful authors writing a number of iconic novels set in South Australia, including The Sun on the Stubble, Blue Finn and Storm Boy, among many, many others. Sadly, when Thiele passed away in 2006, news of his passing was largely ignored by the local media--and that interstate--as he passed away during the same week as Steve Irwin and Peter Brock, and the lack of recognition given to this marvellous South Australian author is something that still makes my blood boil today.

I first discovered Jodie's Journey when I was in year six at Morphett Vale South Primary School. Our teacher read the story to the class--a chapter every afternoon--and I soon found myself getting caught up with the story of this brave young woman.

The novel opens with the title character--Jodie Carpenter--and her horse Monarch, winning an important medal at the local showjumping championship. The next day, Jodie finds herself in a considerable amount of pain and as time goes on, her pain does not get any better, and soon she finds herself diagnosed with juvenile arthritis. For Jodie, it means a lifetime of near constant pain and never being able to ride her horse professionally again. She even needs a wheelchair.

Much of the novel is spent explaining to children Jodie's experiences of arthritis (something that the author has firsthand experience of,) her disappointment of having to give up horse riding, and the difficulty that she finds relating to kids her own age (at the beach, for example, a group of boys cannot understand why she does not want to join them.) And then, the final chapters are as exciting as they are dramatic. The reader gets of a sense of what might come, as this story is set in the Adelaide Hills in the early 1980s, but as dates and references to real life events become more frequent within the novel, until the eventual mention of the exact date, and where fires had broken out that morning, the reader is left in no doubt as what is to come. When Jodie finds herself home alone that day, barely able to walk, and in the path of one of the biggest fires to destroy the Adelaide Hills, you just know that the final part of this story is exciting.

And there is no doubt about it, Monarch is a hero.

Inspired by both real life events, and a letter from a young woman who suffered arthritis wrote to Colin Thiele, there is no doubt in my mind that this is one of the most interesting and exciting children's books that I have ever read. Even the re-read managed to keep me gripped.