Review: What We Saw by Aaron Hartzler 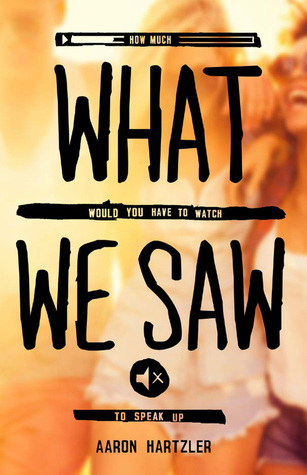 How much courage does it take for someone to do what is right? That is the question at the heart of Aaron Hartzler's provocative new YA novel, What We Saw. Kate Weston is a good kid. She's smart, loves science and plays on her school soccer team. Romance is blossoming between her, and her old childhood friend, Ben. Technology isn't a terribly big part of her life and she's not really very interested in what goes on on facebook, twitter and instagram.

Oh, and Kate was at a party last Saturday night, where she and another girl got very drunk. Kate made it home okay, thanks to Ben. But something happened to Stacey and now there is a very unsavoury video being circulated on the internet. And when the police, and the media, get involved, the local close ranks. No one believes that the video exists, and those who do think that what happened is Stacey's fault. After all, she's a girl, a bit trashy and she got drunk at a party. These boys are heroes, the stars of the local basketball team. And the girls think they know the rules--don't act trashy or do anything to provoke the boys.

Most of the novel centres around Kate trying to make sense of what happened, and the way the boys are automatically considered innocent--and Stacey demonised--by the members of the local community. Its amazing how much the local community will tolerate from the boys--whilst pointing the finger squarely at the victim. (After all, the school isn't reliant on Stacey for funding.) Meanwhile, the school and community are demonised by the local media, including one reporter who is determined to use the case to make a name for herself. And Kate ... Kate has her own suspicions about what happened that night, and slowly realises that she needs to be the one who speaks up ... even if doing so comes at a huge personal cost.

Possibly the most shocking thing about this novel is the fact that it is based on real events. This kind of thing can--and does--happen. It is interesting to, the double standards that apply to men and women, and the prevailing attitude that "boys will be boys" while it is up to the girls to protect themselves from the boys, by not doing anything that might "provoke" them, because the boys are surely not responsible for their own actions and decisions. The novel shows, conclusively, that the boys are indeed responsible and there is quite a brilliant argument that takes place between a student and a teacher in Kate's geology class in Chapter 37, which reads:

"Words have meanings. When we call something a theory in science it means something. Reggie, when you say you 'can't help yourself' if a girl is wasted, that means something, too. You're saying that our natural state as men is 'rapist.'"

Overall, this one is very well done. I found Kate to be a realistic and believable character, and one who has a lot of guts.