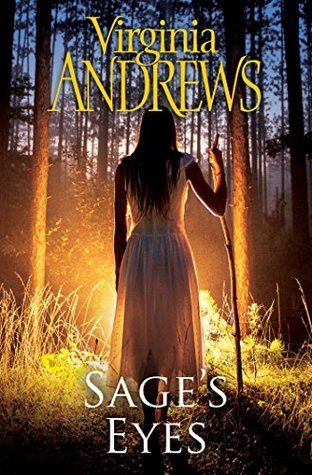 Author Virginia Andrews, or V.C. Andrews as she is known in the United States is best known for her work, Flowers in the Attic, a book that has received considerable commentary worldwide, and indeed on this blog. During her lifetime, she published six novels (and completed three more,) and became famous for her ability to write a rollicking good story, often with gothic themes, that was as successful with teenage readers as it was with adults. Her novels were so successful that, after her death, a ghostwriter was brought in (in reality, Andrew Neiderman a successful author in his own right,) to complete some unfinished work, and to continue writing original stories on similar themes, inspired by Andrews' storytelling genius. In 2016, thirty years after the death of Andrews, Neiderman continues to write these stories, some of them stand-alone novels, some of them as two or three part series. (Sadly, the family sagas that were released during my adolescence have become a thing of the past.) The latest release is Sage's Eyes, a stand-alone paranormal romance, which shares some similarities with some of the previous stand-alone works, particularly Daughter of Darkness and The Unwelcomed Child. (And just like Daughter of Darkness, Sage's Eyes has been released in trade paperback in Australia, and this is the first time that I have seen a Virginia Andrews book for sale at Big W in a number of years--in fact, the only retailer who seems to stock them is QBD, though I've picked up the occasional book, usually an import from the US at Dymocks.)

The story focuses on Sage Healy, a young women who has both exceptional perception and empathy. Her insight is not always welcomed by her strict and seemingly superstitious adoptive parents, who always seem to be studying her closely, looking for traces of ... something. Consequently, Sage keeps most of her insight and visions to herself, though her Uncle Wade provides her with a loving and non-judgemental adult that she can talk to.  (Sage and Uncle Wade seem to have such a special understanding that, at the end of the book, I wondered at the possibility of a future relationship--after all, he is not a blood relative.) Much of the story discusses the harmony between yin and yang, and it is no surprise then that an early love interest for Sage is most definitely the darkness to her light. Summer Dante is a wealthy and mysterious new boy at her school who is older than her years and in some ways, felt to me to be a bit of a parody of Twilight's Edward Cullen--and on that, Summer's dad is a successful author of erotic romance novels that bare some similarity to Fifty Shades. It's an interesting commentary, given that prior to Twilight, Andrews' novels used to take up considerably more space in book stores, and thanks to the success of Twilight and Fifty Shades, that same shelf space is now typically taken up by varied works of paranormal, erotic and contemporary romance. (When I was in my teens, an entire bay, not a shelf, but an entire bay,) at the Dymocks store at Marion Shopping Centre was taken up exclusively with books by Virginia Andrews or V.C. Andrews.

Anyway, Summer is the most charismatic boy that Sage has ever met, and he seems to understand her in ways that none of the other kids (or even her parents,) ever do. But Summer also seems to have a cruel streak, and there are mysterious voices in Sage's head warning her not to get too close. And why is Summer's dad so keen to meet Sage ...

Sage's Eyes was an enjoyable read and probably one of the better Virginia Andrews releases in recent time. That said, it did have a number of faults, the biggest one being unrealistic dialogue. I would have liked to have seen some conflict between Sage's parents and Summer's father, after the big reveal, but I suppose that was not really the point of the story. Fans of the Landry saga might get a little laugh at the Easter Egg that has been left in the book for readers to discover.