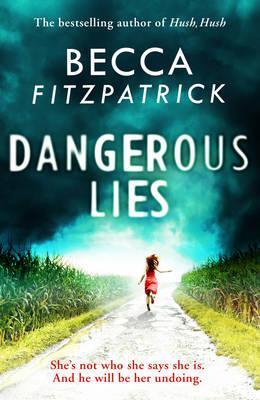 Author Becca Fitzpatrick's latest release is an intriguing, page turning tale about a young woman who is one part spoiled, one part neglected, who finds herself in witness protection. Stella Gordon (as she becomes known,) is the star witness of a terrible crime and to keep her safe, the police have sent her to stay in a small town in Nebraska to live with Carmina, a no-nonsense retired former cop. In Thunder Basin, trouble comes in all kinds of forms--from Stella's feelings for the gorgeous boy next door, to the local bully, who may be a part of her undoing. But the most dangerous lie of all--well, that's for the reader to discover.

For me, Dangerous Lies was, initially, one of those books the kind that I pass on by because it didn't look like the sort of book that would appeal. Anyway, I later picked it up cheap from a bookshop that was having a closing down sale, and I ended up compulsively gobbling the whole thing up in the course of an evening. There were a number of twists and turns that kept me guessing. As for Stella, while she was far from perfect, she was most definitely interesting to read about.