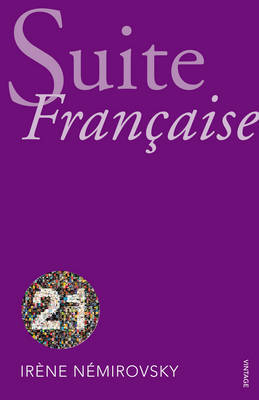 Written by a woman of Russain Jewish origin who was living (and later, hiding,) in France during German occupation, Suite Française remained undiscovered and unpublished until the early twentieth century--sixty years after Némirovsky suffered a terrible fate inside Auschwitz. The book comprises of two nearly-finished novels that were intended as part of a five part series. The first book, Storm in June tells the interwoven stories of four different groups as they flee Paris as German forces invade and some of the cruel realities of war and their situation--at one point Madame Péricand literally forgets her ill and ailing father-in-law and leaves him behind in her attempts to find a safe place for herself and her children. The main players in this feature are the Péricand family, Madame Péricand, her father-in-law and her children including seventeen year old Hector who is desperate to join the armed forces and fight for his country. A parallel story features oldest son, Father Péricand who is a priest and lands the job of transporting a group of orphan boys to safety, a task that has an ending that is as tragic as it is gruesome. Meanwhile, an older couple, the Michards travel through France not knowing whether their son, Jean-Marie is dead or alive, and suffer a gross betrayal at the hands of their employer. Charles Langlet tricks people as he fights to survive and arrogant author Gabriel Courte manages to get the best of everything. And most (not all) make it back to France and life goes on, though perhaps not so nicely or as happily as before.

The second part of the book Dolice is set in the French countryside and is a love story of sorts, with a young, married Frenchwoman falling in love (against her wishes,) with the German officer who is billeted to her home. Initially the pair would seem to have little in common, then, it seems they have everything in common until circumstance proves that they can never truly see eye to eye. The film version of the book is mostly concerned with this part of the novel, though the ending is slightly different, as the was intended to lead on to a third volume that never eventuated.

As is often the case books that are translated, I struggled in places and found the language to be a bit limited and boring. The first part of the book had some great moments, some gory moments and some dull moments, though I think that it truly captured the reality of war and what humans will sometimes do to one another in their desperation to find a safe place. The second part poses the question of whether enemies can ever really be friends, or even lovers, and it also examines the reality that love cannot always conquer all.

I enjoyed reading this one, though it took me a while to get through (the print in my copy was painfully small, leaving me to wish that I had bought it as an eBook instead.)

Filled with painful, and often deep, questions and observations.