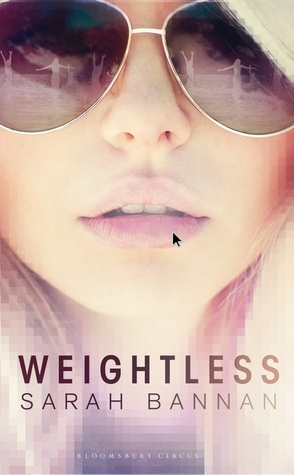 At the time of writing this post, Weightless by Sarah Bannan is my favourite read of 2015. The novel offers readers an unflinching look at the nature of bullying, mental illness and how easily the tables can be turned. Do two wrongs ever make a right? Was bullying really the cause of a high student's suicide, or just one of many unpleasant experiences that contributed to Carolyn Lessing's decision to take her own life? Did the system fail Carolyn, or did she fail herself?

Set in a high school in Alabama, Weightless is hauntingly narrated by a group of Juniors who refer to themselves as a collective "we." They live in a town with a two major interests, religion and football, though mostly they spend their time praying that the school football team will win. (In many parts of America high school football teams can be a huge income earner for the school.) Anyway, the kids at the school have known each other since birth. No new kids ever arrive here. The current crop of students know all of the unspoken rules about social conduct--cheerleaders don't socialise with kids on the swim team for example, and that certain couples belong together. When new girl Carolyn arrives in town, she has no idea of these "rules" and soon makes enemies of popular girls Brooke and Gemma for breaking them. Over the course of the year, the bullying becomes worse, what friends Carolyn has made drift away and she is dumped, brutally first by popular boy Shane and then by popular boy Andrew. Along the way, we see numerous instances of cyber-bullying, rumours gone wild and the odd glimpse into Carolyn's personal life which suggests that her personal and home life may not be quite as she makes out and that has a mental illness. The final few chapters focus on the aftermath of Carolyn's suicide and how the bullies become targets on a national and very public scale.

There is something enjoyably unnerving about this cautionary tale as author Bannan carefully examines human nature--peer group pressure, unspoken rules and a fear of anyone who might be a little bit different. There is also a look at keyboard warriors and how easily the Internet can be used to say hurtful and damaging things about others. What begins as a witch hunt against Carolyn soon becomes a witch hunt against her tormentors and, really, no side is better than the other. Carolyn's essays and the transcripts of her discussions with the student guidance counsellor offer the reader some insights into her life. I also found it interesting that although Carolyn was easily smarter than her tormentors, Brooke and Gemma were far more adept at manipulating the people around them and this gives them the edge. Shane and Andrew come across as equally disgusting--both dump Carolyn at the first sign of any trouble (despite the fact that they supposedly care about her,) and have a much easier time escaping their small town in the wake of all the trouble. The question remains, of course, was all of it really their fault? Or did they just help contribute to a much bigger problem?

A thoroughly worthwhile read, and oddly addictive read, and a realistic glimpse into the nature of bullying as well as a look into the life of a teenage girl who is far more vulnerable than what she may appear on the surface.