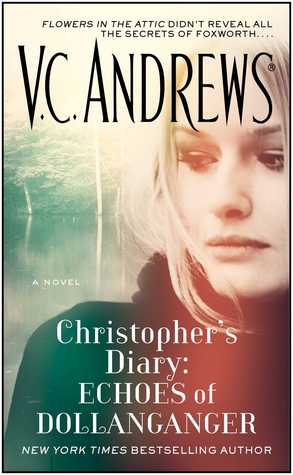 Echoes of Dollanganger, I suspect will be best remembered by fans for it's epilogue which describes a surprising turn of events--the return from the dead of a major character from Flowers in the Attic. (And yes, that character is a Foxworth.) Picking up where the previous novel in the Diaries series leaves off, ghostwriter Andrew Neiderman reunites readers with Kristen Masterwood, a heroine with blonde hair, cerulean blue eyes and a mysterious link to the Foxworth family. Kristen also has in her possession a diary that belonged to Christopher Dollanganger and is reading about his time locked away in the attic by his mother and grandmother ...

As was the case in Secrets of Foxworth (read my review here) the strongest scenes are the diary entries. This novel tells the second half of the story, where the children suffer the most cruelty, where Christopher's relationship with Cathy is challenged and when the surviving children plan their escape. Christopher's storytelling remains very precise and to the point. (How many teenage boys would be able to accurately and confidently use the word 'menarche' in a sentence, for example? Although correct, it is a surprising word choice, particularly when puberty would suffice and would much more likely be understood by his ditzy mother.) And once again, it is lovely to revisit those scenes from a much-loved book.

Kristen's story is marginally less interesting. Kane has found her diary and proves himself to be far less of a gentleman than Christopher Dollanganger by insisting to Kristen that they read the diary together in her attic and that he will wear a blonde wig, so that he and Kristen may pretend to be Christopher and Cathy. The roleplaying comes across as creepy, disturbing and, dare I say it, just a little bit funny for all the wrong reasons, rather than sexy.

The most truly memorable part of this one was the epilogue and the discovery that a much loved character from Flowers in the Attic may still be alive and living under a different name. What then, of the chilling discovery that Cathy made in the attic all those years ago, the one that caused Corrine to go mad? Of course, it has been debated among fans before who may have started the fire in Foxworth hall, whether it was Cathy or Corrine (and either had their reasons,) but the real clue that Cory is dead comes from Corrine's reaction. At the end of Petals on the Wind, she is able to dismiss everything until she is confronted with the possibility that Cathy may have discovered Cory's body. It's our best clue that Cory is dead. However, in Echoes of Dollanganger we are provided with the possibility of a plastic skeleton, that the attic always smelled bad because it was never properly aired and that Cory may have been abandoned at the hospital and subsequently adopted by a wealthy family. Unless, of course, William Anderson's connection to the Foxworth family turns out to be quite different.

Is the mysterious old man who calls himself William Anderson really who Kristen believes him to be? (Or is he just a nut?) Will his story help to explain Kristen's own connection to the Foxworth family? These questions remain open at the end of Echoes of Dollanganger and I hope that they, along with the fortunes of Cathy's children Jory, Bart and Cindy, and her grandchildren, Darren and Deirdre, will be revealed before the conclusion of the Diaries series.

Wintress said…
Wow. I loved this, merely because you accurately pinpointed out why Cory's death is so crucial to the initial series... Basically I'm hoping with all my yellow paper flowers that the GW will do much better than this in Secret Brother.
18 April 2015 at 19:28

Kathryn White said…
Thank you. Cory's death is absolutely an important part of the series--especially during the confrontation in POTW. Also, I think if there was a chance that he was still alive, Corrine would have mentioned it before she died in ITBT.

I'm hoping that Secret Brother plays out in a way that will satisfy fans.

Also, I'd love to learn Kristen's exact connection to the Foxworth family. Echoes suggests that her mother and Malcolm Foxworth were cousins--it's hinted they were first cousins, which would be rather odd. It mean that Kristen's grandmother or grandfather was Malcolm's brother or sister. Malcolm had one brother who was, of course, Christopher senior, father to Christopher and Cathy.
18 April 2015 at 19:38