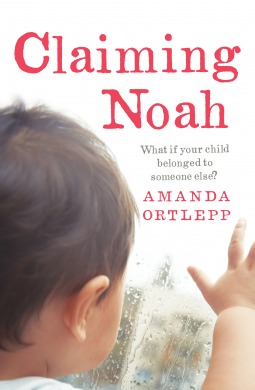 The moral and ethical implication of embryo donation are at the heart of Claiming Noah, the debut novel from Australian author Amanda Ortlepp. Catriona and James are keen to start a family. When an IVF treatment is successful, they decide to donate the remaining embryo. Childless couple Diana and Liam, meanwhile, have just received the news that they have been waiting for--after a lengthy wait, an embryo is available. Two boys are born, just a month apart. The lives of Catriona and Diana could not be more different. Diana happily settles into motherhood, while Catriona suffers a psychotic episode that sees her removed temporarily into psychosis. When Catriona returns from hospital, she notices some differences in Sebastian, her son. Meanwhile, Diana's son, Noah, is missing ...

Claiming Noah is not so much driven by the mystery of who took baby Noah (that is fairly obvious,) but the implications that Catriona and James' decision to donate an embryo had on their lives, the lives of Diana and Liam and ultimately, the life of Noah. Who does Noah belong to, really? Diana and Liam? Catrionia and James? Or is he in actual fact a part of all of their lives?

This novel is filled with gut wrenching emotional drama as the reader shares in the lives of the characters--pregnancies, psychosis, abductions, custody battles, affairs and the heartache of discovering that ones spouse has done the unthinkable. The writing itself is very accessible, Ortlepp does not fill narrative with medical or legal terminology, or overlong descriptions and makes complex issues easy for her readers to understand. I found the ending to be satisfactory, given the issues.

Recommended, but keep some tissues nearby.

Thank you to Simon and Schuster Australia for my review copy.