Review: Before the Fire 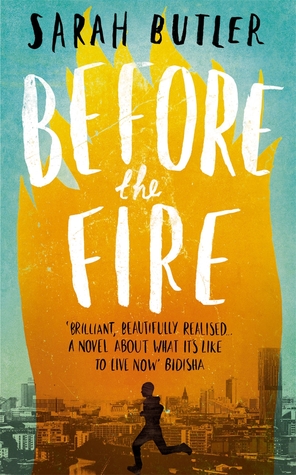 Set in the lead up to the London riots of 2011, Before the Fire is an intelligent and believable coming of age story about an eighteen year old boy who is grieving for his best mate. Kieran, better known by his nickname, Stick, believes that his life is finally starting to take a turn for the better. He has suffered a few traumas during his childhood--the death of his sister and his parents divorcing soon after. Stick lives with his mum, who has OCD and who is reluctant to admit that there is a problem. His dad, meanwhile, has remarried and he and his new wife have two daughters. It is not difficult to see why Stick is resentful of his situation, though his parents are presented as being basically okay people (despite their failings,) and who most definitely care about their son. Anyway, Stick and his best mate Mac have organised a trip to Spain, where they are planning to live and work, and Stick is thoroughly looking forward to the change and to leaving Manchester behind. But on the evening of their going away party, Mac is murdered and Stick is left behind ...

Before the Fire is brutal in its honesty and in its portrayal of a troubled teenage boy. And this is exactly what makes it such a compelling read. Far from offering an idealised view of adolescence, the author tells things as they are, presents readers with real-life problems and writes situations that made me stop and think about human nature. I also liked the paring of Stick with J, a delinquent girl with a penchant for trouble. The whole thing is about as far away from a cliched YA romance as you can get and as a reader, I thoroughly appreciated the contrast. Stick, his family and his girlfriend are all far from perfect, but the situations felt real and easy to identify with. I may not necessarily condone everything that the character does, but I loved having the opportunity to try and understand why he did it.

The London riots themselves provide an interesting backdrop and parallel--just as Stick wants answers to the death of Mac and to avenge it--the riots were caused by a demand for answers and a way of avenging one person's murder. It is interesting what Stick does when he finally finds himself face to face with Owen Lee, the man responsible for Mac's murder--the scene shows a real test of character.

If you're looking for a hard-hitting, confronting read about what life can be like for some kids, then Before the Fire is an excellent choice. Recommended.
Before the Fire Sarah Butler

RuthB said…
Wow, you make it sounds like a really good book. Thanks for the review I will look it up and probably read it sometime soon

Unknown said…
This one's on my TBR at the moment Kathryn - a TBR that I'm just not getting to! I'm looking forward to reading it especially after reading your review (which I don't usually do before I've read a book by the way)! I love books that are thought-provoking and make us look at issues we would never otherwise be confronted with.
2 May 2015 at 16:14

Kathryn White said…
It's a wonderful read and I do hope that you enjoy it. And thank you for reading my review :) (I know it's always chancy reading reviews for a book that is already on the TBR pile!)