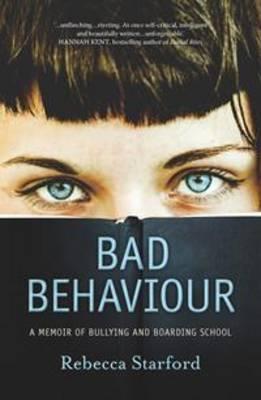 Bad Behaviour is Australian writer and editor Rebecca Starford's autobiography about a year spent at an elite alternative boarding school in the bush, that has a focus on physical activity and where all modern technology--phones, televisions etc are banned. Along with sixteen other girls, some of them quite badly behaved, some of them quite vulnerable, she was sent to stay in a self-governing and mostly unsupervised boarding house. The autobiography tells of some of the shocking incidents of bullying that occurred during her time there and the effect that some of the incidents later had on her adult life.

I found Bad Behaviour to be strangely addictive reading. Although my own schooling was quite different (I attended a public high school with a 'bad' reputation,) I instantly drew comparisons between Rebecca's schooling and her relationship with the other boarders, and my own experiences at high school--the fears of not fitting in, of being marginalised for no good reason and of sucking up to the girls who wield all the power. Through flashbacks to the past and accounts of her present day struggles, the author nails the nature of female friendships and relationships, and the utter devastation of being rejected by the people we care about the most.

Many of the girls in the boarding house are desperate to win the approval of Portia, the senior girl who rules over the others, even though they do not like her. Rebecca is for a time favoured by Portia and later dropped. She also watches as another girl, Kendall is relentlessly bullied. During this period she battles homesickness, the loss of a loved one and some horrible experiences at the hands of her teachers that supposedly build character. The teachers are either oblivious to most of the bullying that goes on in her house, or they do not care. Rebecca's parents seem similarly oblivious to the problems that their daughter is experiencing and the fractured relationship that she experiences with her mother is also mentioned, as is the way that sadly, the two women become estranged in later years. Meanwhile, the author herself is not afraid to tell it like it is, often holding herself accountable for various incidents and demonstrating much of her own bad behaviour.

This tale of boarding school is unflinchingly real. Definitely not for the faint of heart. If you want to know what female bullying really looks like, then I highly recommend reading Bad Behaviour.