Review: The Duff by Kody Keplinger 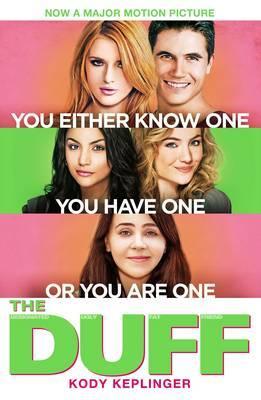 Originally published as part of (then) teenage author Kody Keplinger's Hamilton High series, The Duff has recently been made into film which will be released in Australia in April. And, of course, a new edition of the book, with a film tie-in cover is now available. Anyway, there was something about the bright cover and the concept of The DUFF (which stands for Designated Fat Ugly Friend,) that appealed to me, which I suppose may explain how the book found its way on to my to-read pile, despite the fact that I am well outside of the novel's intended YA audience.

The Duff opens with Bianca Piper, a seventeen-year-old senior high school student Bianca, who is a little bit short, a little bit plump, and a lot smart and sassy. Bianca's best friends Casey and Jessica are gorgeous. But that has never been a problem for the trio until bad boy Wesley calls Bianca the DUFF of her group. Suddenly, Bianca starts questioning everything about her friendship with the others and her status in the group. And then the novel takes well, a bit of a surprising turn when, desperate to escape all the drama that is happening at home (and there is a bit of it,) Bianca initiates a friends-with-benefits relationship with Wesley that he seems a little bit too happy to be going along with. Over the course of the novel, Bianca learns a few important life lessons about facing up to her personal responsibilities and also that labels (such as the DUFF,) are false and not worth paying attention to.

While The Duff has been enjoyed by many readers, this one did not work quite so well for me. I suppose some of this may be a generational thing--back in my day when teenagers used to ride on a pterodactyl down to the local library or bookshop instead of a bus, sex in YA was rather a big deal. Judy Blume's Forever was considered to be the hottest and most definitive fiction book on the subject, and often the focus was on first relationships. (The consequences of which were sometimes dire and over-the-top, such as in My Darling, My Hamburger.) That said, I don't think there is anything wrong with sex in YA, I don't think that it must always be accompanied by morals and life lessons, or that the characters *must* be in a relationship but ... (cue grumpy thirty-something,) I was surprised by just how flippantly sex was treated in this book. There is nothing graphic in there (not that I would be offended if there had been,) but something about the way the characters regarded their sexual lives at age seventeen seemed a bit off-kilter to me. Bianca claims that she feels empowered to be intimate with a boy who she cannot stand, and states that she is doing so to escape from her problems, but her reasoning and the complications of her doing so are never really explored in a way that has any real substance. It is just something that Bianca does, which eventually leads her to an unlikely romance. Wesley's bullying of Bianca, labelling her "The DUFF" is never properly explored either--was Wesley attracted to Bianca all along and teasing her, or did he really think that?

Anyway, there are some interesting thoughts on how labels can and do affect people and that people cannot run away from their problems forever. And lets not forget that this was the debut novel from an author who was still in her teens--how many people could have written a book and beaten the odds to have it published at that age, and then had it become a best seller? The answer is, not many. So much respect for that.

Although I did not enjoy this book as much as I had hoped to, I can see why many readers did and why it would make an appealing teen movie.

RuthB said…
I haven't read the book yet and the movie doesn't really caught my attention, I mean the guy looks older than 17.
Anyway, I'm sorry you didn't enjoy it that much
Ruty @Reading...Dreaming
2 April 2015 at 08:51

Kathryn White said…
I know what you mean. The actor looks far too old for the part.