January 07, 2015
Welcome back to Writers on Wednesday. This week, I am chatting with O.N. Stefan, author of The Deadly Caress ... 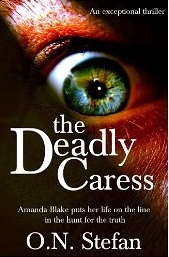 I live in Sydney, Australia and find inspiration for the characters in my books from everywhere and anywhere.  The car chase scenes are from memory because as a child, I witnessed many car accidents as I lived near a bad T-intersection. Nearly every weekend vehicles miscalculated the sharp corner and either ran into a light post, an oncoming car, flipped over or spun out hitting other cars in the process. My dad would run over to see if an ambulance needed to be called as they were the only family in the street to have a phone. He'd take blankets over if anyone was badly injured and I would help him.

The Deadly Caress is a fast-paced story set in California. Suspenseful and thrilling, it is holds a mystery that Amanda Blake, a freelance photographer, must unravel.

Amanda tracks down her birth mother the multi millionaire Jean Campbell. Hours after her arrival, Jean is murdered.

Amanda sets out to discover her mother’s killer. Her quest takes to Australia to find the man she thinks holds the answer to the killer’s identity. While visiting this man, she has to run for her life under a hail of bullets. Someone will stop at nothing until she is dead. If she thought things were bad enough, they are about to get much worse.

I was excited when I had my first short story published in New Idea several years ago.

My proudest achievement was launching The Deadly Caress on kindle.

Currently, I am editing another thriller that will be published early next year.

It doesn’t matter for me as I like both. For ease of transport, I would take my kindle on holidays.

I think Indie publishing is overtaking traditional publishing. So many new authors would not have been read had it not been for ebook publishers.