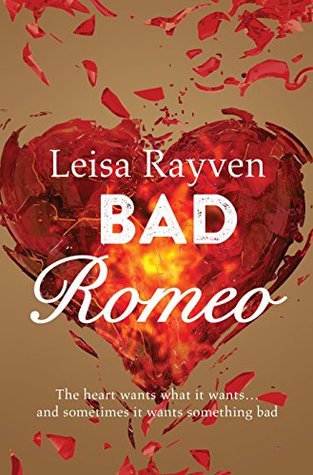 The debut novel by Brisbane based writer Leisa Rayven is an amusing sexy, tale that teases readers as it moves between the past and the present to tell a story of two actors whose relationship seems every bit as doomed as the characters they play. Six years ago, Cassie Taylor and Ethan Holt met and were cast opposite one another in a student production of Romeo and Juliet. The sexual tension was obvious, but it was not long before bad boy Ethan broke Cassie's heart. Now both professional actors, Ethan and Cassie have been cast opposite one another in a Broadway production. Ethan wants Cassie to give him another chance, but Cassie is not so keen. Will she take a chance and risk Ethan breaking her heart ... again?

I enjoyed reading Bad Romeo. Though the novel was a little slow, and the time slips could be confusing at times, I found myself intrigued and wanting to know more about how Cassie and Ethan got together, and what had caused their eventual, bitter break up. (Though in this volume, the author teases us with snippets of information about what happened.) Some of the young Cassie's diary entries were quite amusing--certainly not things that I would never have dared to write or admit to (even secretly,) at that age. The Romeo and Juliet references were quite apt, considering that Cassie and Ethan were also in love and their relationship doomed to fail.

Although some readers may disagree with me on this one, I enjoyed the way that the author portrayed Ethan. Although he may be a bit of an arsehole, he at least knows he is an arsehole. I never got the sense that he intended to lead Cassie on, or that he was eager to control, corrupt or introduce her to anything that she was not ready for, which is rare for a bad boy in contemporary romance. (Think Fifty Shades, or After by Anna Todd, both of which contain stereotypical bad and damaged male leads.) Cassie, though a virgin, has control of her sexuality. She knows what she wants, is not afraid to ask for it or to talk about it, which I find is far too rare in this genre. Although she suffers infatuations and disappointments (as we all do,) there is no sense of her being controlled by her sexual partner. My only real criticism is that a number of secondary characters (ie Zoe, Ruby and Conner,) fall a bit flat.

The sequel, Broken Juliet will be published later this year.

I also love the shiny foil cover on the Australian edition.