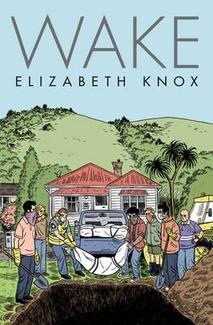 I strongly suspect that Wake is a novel that will stay with me for a very long time. Set in a small, coastal town in New Zealand, the novel tells of a group of fourteen people who survive a strange kind of madness that causes many to harm themselves before death eventually overcomes them. The same, invisible field of energy that is responsible for causing the madness also cuts the fourteen survivors off from the rest of humanity and they are forced to learn to bind together as a community first to survive and then to overcome whatever has caused the problem. These survivors range in age and there is a strange mix of complex personalities including the self-serving American lawyer William, teenage gamer Oscar, the capable community police officer Theresa and dim-witted Sam, who, initially would seem to suffer from bouts of multiple personality disorder, though her story becomes increasingly complex throughout the narrative, to the point where I realised that she and not Myr may very well hold the key to all of this and may be able to find some kind of resolution.

Wake is in one sense a well-crafted gory horror story and in another, a tale of human survival and what it means to be a part of a community and to sacrifice ones own needs for the good of the rest of the group. Highly recommended.
Elizabeth Knox Wake