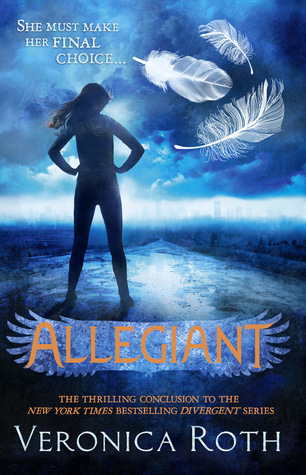 The third and final novel in Veronica Roth's Divergent series is a little quieter than its predecessors and a little lighter on the action, though it moves steadily toward a fitting conclusion, with a moral about what it truly means to be smart, selfless and brave, which are, of course, Tris Prior's three defining characteristics. A number of questions are answered, Tris leans more about the history of her home city and the surprising history of her mother, Natalie. The writing is of about the same standard of the two earlier books (could be better, could be worse,) though the narrative changes slightly with some chapters told from the perspective of Tobias/Four.

And that is really it. After I finished reading, I found myself totally void of negative emotions as I placed the book on my desk and added a sticky note to the top, reminding myself to review the novel later on. There has been a lot of controversy surrounding Allegiant, particularly from those who read and reviewed the novel in the hours following its initial release, and I am going to be honest and admit that much of this makes me sad. The novel is by no means perfect and the whole thing about damaged genes and dividing people based on a personality traits is a bit silly if you stop and think about it, but that is where the whole concept of suspension of disbelief comes into play. This is where the author uses a grain of truth or realism to draw the reader in to a fantastic fictional world so that they will not immediately question some of the more improbable concepts within that world. Take for example the early MGM cartoons featuring Tom and Jerry. We had some shades of realism there. Tom was a cat and it was his job to keep the house free of mice. Jerry was the mouse and he had the task of outwitting the Tom so that he would not be killed and eaten. The cartoons then revolved around Jerry's hilarious attempts at outwitting Tom so that he would live to see another day. Many of the scenes were so funny, that it no longer mattered that Jerry could often lift something twenty times his own weight or that Tom seemed to escape situations unharmed were an ordinary house cat would have most certainly used up most of its nine lives. In the world of Divergent, the truth lives within the teenage heroine, Tris Prior. A suspension of disbelief is required to understand the world that she lives in. On the whole, Roth does a competent job of explaining the strange world in which Tris Prior lives. Consequently, her take on factions and genetics makes sense within the context of the novel.

I found Allegiant to be a fitting end to a series that I found interesting, though not always as action-packed or as gripping as it could have been. If you liked the first two books, I recommend giving this one a chance and judging it for yourself.
Allegiant Veronica Roth