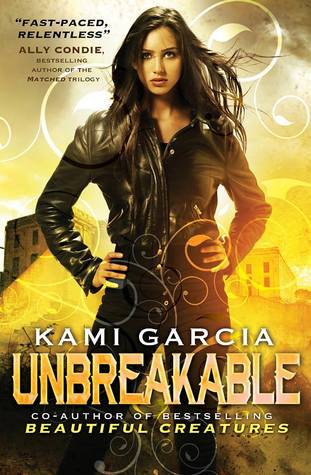 YA author Kami Garcia's first solo novel, Unbreakable, (she's one of the authors of the Beautiful Creatures series,) caused a bit of a storm when it was released in late 2013 and it is not difficult to see why. Unbreakable is an action packed, suspenseful novel with a decent heroine and an enjoyable romantic subplot. It's also bloody scary in places.

Seriously. Back when I was a teenager, R.L. Stein and Christopher Pike were about as scary as it got. By comparison, this one feels like the bad arse big sister who has just grabbed the genre by the balls and now she won't let go. Brutal, but unputdownable.

Sadly, the only thing that lets this one down is the premise. When Kennedy's mother dies suddenly, she is visited by a pair of identical twins (who just happen to be gorgeous but hey, this is YA fiction,) who reveal that her mother belonged to a secret society who protect the world from all kinds of evil, supernatural phenomena. And not only that, but four other members of the society died on the same night. Luckily, this secret society works in sort of the same way that the Phantom does, with an heir taking up the duties of the recently deceased. And this is where I struggle a little bit with the plot. The four other heirs (which include the gorgeous twins, Lukas and Jared Lockheart,) have been training for this for a long time. Kennedy, on the other hand, had no knowledge of what her mother was involved with. The implication is that her mother left the group, but is seems awfully strange that, knowing her daughter was her most likely heir, that her mother would not have equipped her with at least some skills and knowledge about fighting ghosts. Anyway, along with the other members of the group, the unfriendly Alara and a guy called Priest, Kennedy finds herself a part of a ghostbusters style group that travel about destroying ghosts or setting them free into the other world. The goal is to track and destroy the evil that murdered all five members of the group. Each encounter with the other side gets a little bit more scary and gory until the utterly frightening, cliffhanger ending ...

What lets this one down for me is not knowing enough about Kennedy's mother and her backstory, though as this is the first in a series, I suspect that it may be revealed at a later stage. Kennedy's scars (or lack thereof,) point to their being something a little different in her background to the other members of her group. So while not knowing enough about her mother annoyed me, there is a very good chance that the author knows what she is doing and that I should trust her. The second book in the Legions series, Unmarked, will be released in October 2014.

This is definitely one for YA horror fans, though those with delicate sensibilities might be advised to proceed with caution.
Kami Garcia The Legion Unbreakable