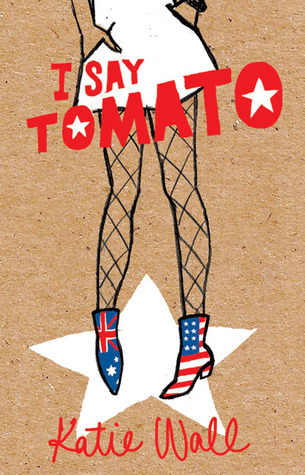 I Say Tomato had, until a few days ago, the rare distinction of being the book that has sat on my to-read pile for the longest. I purchased it back in 2010 from a popular secondhand bookstore, slightly amazed that I had found a new release book there for less than three dollars. I took it home, placed it on my to-read pile and well ...

I guess these things happen ...

I Say Tomato is a brilliantly fun and entertaining novel about an Australian actor who is walking what has, in recent years, become a very familiar path for a lot of young actors. After a successful stint in a popular Australian television drama, she travels alone to LA to try her luck in Hollywood. From there, the reader is treated to an account of what Hollywood looks like through the eyes of a young Australian girl who probably isn't going to become a big star. Sunny is a refreshingly honest character though she is struggling a bit with what she wants out of life. A few months ago, back in Australia, her long-term boyfriend proposed and she turned him down. Now she is struggling with that choice. As the novel goes on, we see that travelling to Hollywood is more of an excuse for Sunny to hide from her feelings and the result of her choices than what it is about her trying to forge a career for herself as an actress.

Debut author Katie Wall is an AFI award winning actress (for her performance as Belinda in Marking Time,) and her knowledge of the industry, in Australia and abroad, shows quite comfortably and confidently in her work. Parts of the novel feel very episodic--moving from one scene to the next without really looking back--though what really keeps it together is learning more about Sunny and her relationship with Tobey who is back in Australia and who may or may not be moving on and finding someone else. With that in mind I would have liked an ending that gave Sunny a bit more closure, rather than leaving us wondering what would happen next between her and her ex-boyfriend Tobey now that she was back on Australian soil and had made some important decisions (I don't think I'm giving away too many spoilers by saying that).

I Say Tomato offers an brilliant insiders view of life as an actor and its exploration of how Hollywood may feel to an outsider from halfway across the world. The relationship between Sunny and Tobey seemed very real, full of problems caused by miscommunication, fear and indecision. Recommended.

shelleyrae @ book'd out said…
LOL I have books that have been on my to read shelf for at least double that length of time! Glad you enjoyed the book though!
20 February 2014 at 21:21