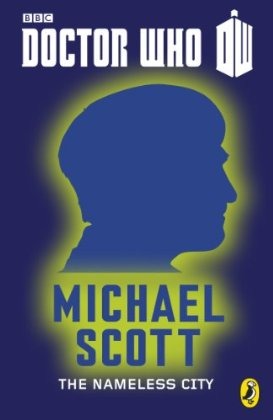 The Nameless City is the second in a year long series of eBooks released by Puffin in 2013 as a part of the 50th anniversary of Doctor Who celebrations. Each story was to feature a different incarnation of the Doctor, written by a different and well-established author of books for children and young adults. And despite catching this one rather late, I have to admit, this and the other stories prove to be one hell of a nostalgia trip for an old Whovian like myself. Consequently, I have decided to feature them all on here, every Sunday over the space of the next few weeks.

The Doctor: The Second Doctor

The Author: Michael Scott, Irish author of more than 100 books and most famous for the Secrets of the Immortal Nicholas Flamel series.

My Verdict: I am less familiar with the Second Doctor than I am with the first, so I cannot comment too much on the characterisation. In this adventure, Jamie is given a copy of none other than the Necronomican by a mysterious book dealer and takes it back to the Doctor. This in turn leads to an adventure where they meet the Archons, a former deep sea race who want to take possession of the TARDIS. What follows is typical Doctor Who stuff with the Archons being defeated in a surprising but non-deadly way. Lots of fun ...
Doctor Who Michael Scott The Nameless City The Second Doctor