Review: A Girl is a Half Formed Thing by Eimear McBride 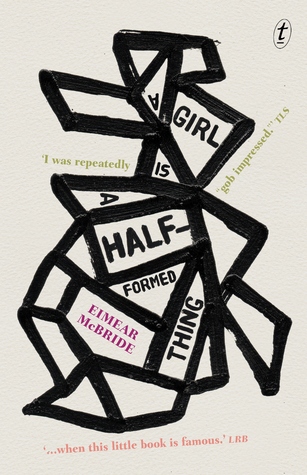 I really do not know what I was expecting when I purchased a copy of A Girl is a Half-Formed Thing from my local bookstore last Saturday morning, but delving inside the pages, I soon discovered a coming-of-age tale that was every bit as uncomfortable as it was addictive. Set in Ireland, the book is told in a funny, stream-of-consciousness narrative that I found quite irritating at first, but it became easier to read as the novel went on. There is no real plot. We meet our unnamed heroine, discover that she has an older brother who almost died of childhood cancer and watch as she grows up against a backdrop of a broken and abusive family. Most the book is made up of the heroines perceptions of the world, which are based upon some pretty heart wrenching experiences--her relationship with her 'uncle' for example--and it makes for uncomfortable reading. I cannot say that I liked the heroine or any of the characters in the book, but then again, I don't think that I was supposed to. A Girl is a Half-Formed Thing is an awful tale of an awful life lived, told in a way that is both frightening and addictive.

A fine and engaging story in its own way, but not a great read for anyone wanting to read book with a happy ending.
A Girl is a Half Formed Thing Eimear McBride