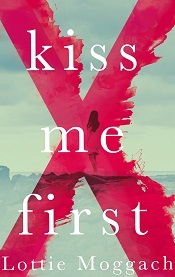 Kiss Me First is a brilliant, eerie and, at times, unpredictable cautionary tale about the perils of the internet. Leila (pronounced Lay-la,) is a lonely, but highly intelligent young woman living alone in London. Deeply introverted, Leila has no interest in the world around her and nor does she understand other people or the complexities of social interaction. Consequently, she lives as a bit of a hermit but finds salvation in the internet and a Libertarian forum called Red Pill, where her views on philosophy are welcomed and appreciated. And then we meet the administrator of the site, Adrian and here the proposal he has for Leila and the book takes a very interesting turn ...

Leila is asked to impersonate a woman online, Tess, a woman suffering from bipolar disorder who intends to take her own life. In Leila's opinion, people should have the right to choose when and where they die and on what terms, so she has no qualms or questions about taking on this job. It also does not hurt that Adrian is a fairly persuasive kind of a guy and that his website is the first place where she has felt any real sense of belonging. And so, she spends the next few weeks learning all about Tess so that she may take over her life (the idea is to convince Tess' family and friends that she has left for overseas, and then her emails will become less and less frequent, so that they just forget about her.) After Tess departs, presumably to commit suicide, Leila learns a number of life lessons, with one of the most notable being her naive attempt to form a relationship Conner, a lawyer and less than exemplary ex-boyfriend of Tess. No matter how hard she tries, she simply cannot slip into another persons life.

And then, of course, comes the revelation of who and what Adrian really is ... Some parts of Adrian's backstory surprised me, other parts did not. It's one well worth reading, so I am not going to include any spoilers here.

Running alongside this story is that of an older and (slightly) wiser Leila as she travels through Spain in an attempt to discover what really happened to Tess. There is a hint, through her friendship with Jonty, that there may be some hope for Leila and her future, though many things are left unclear at the end of the novel.

I enjoyed reading this one and although the prose could be quite slow at times, I found myself utterly absorbed in the tale. Leila is an interesting narrator--I could hardly describe her as a heroine but nor can I be cruel enough to describe her as an anti-heroine. She is someone with a lot of intelligence and well intentioned though foolish ideals and most of her wrongdoing is due to a lack of understanding about others, limited social skills and the lack of life experience to understand that philosophies and ideals do not always work out in real life. The author does a wonderful job of explaining her actions and reasonings, though. I have to admit, I liked Tess and the way the author showed her to Leila's opposite in many respects and the little hint at the end at what may have happened to her. Adrian, is, of course, one very sick puppy. On a more personal note, I found that I disliked Conner quite intensely--he is a real example of a sad, foolish exploitative middle-aged man who wants to use Tess as a bit of flirting fodder behind his wife's back. That said, Leila is deserving of some of his disgust and anger and it is only through his reaction that she can begin to understand the enormity of what she has done and become a better person.

PS: You can view the very eerie trailer for the book here.