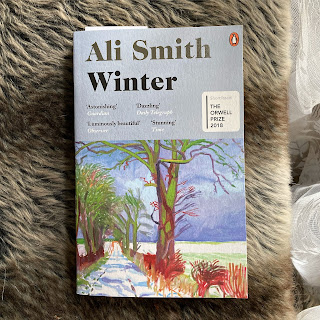 A few years ago, I wrote quite a nonsensical review of Autumn, the first novel in Ali Smith's Seasons quartet in my attempt to sum up my feelings of the novel which were--and remain--quite mixed. And now, it seems, I'm a real glutton for punishment, because not only did I struggle through Winter, but I am attempting to review it.

Much like its predecessor Winter is about the author's disdain for the political situation in the United Kingdom. Published in 2017, it already feels very dated which I feel can be attributed to the fact that four years ago, we had absolutely no idea that the world was just a couple of years away from the outbreak of a global pandemic, the havoc it would cause and the shift in priorities. Consequently, I found it very difficult to read this story--of four people who celebrate Christmas together in spite of the fact that they all dislike one another, and feel very marginalised and misunderstood. There are conflicting political views, and varying conflicts of interest. Much of their experiences act as metaphors or as ways of trying to explain politics and why people believe the things they do, but to me, the whole thing just felt uncomfortable and I gained no pleasure and very little insight from reading it.

And for some strange reason, in spite of the fact that I very near hated this book toward the end, and even though the plot was very thin on the ground and I couldn't think of one compelling thing about any of the characters, I just couldn't stop reading.

I imagine this one would be far more enjoyable to readers with a stronger grasp of British politics who would, therefore, be more receptive to some of the subtitles and characters.