Greetings From The Unicorner: A Random Sweet Valley Post 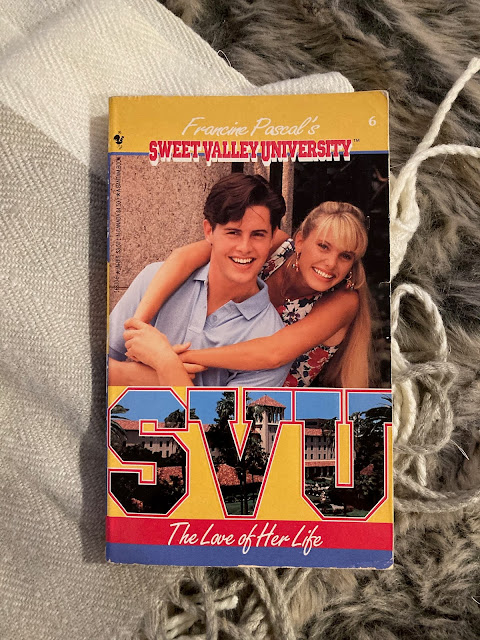 Sweet Valley University #6
The Love of Her Life
Could that blonde be Elizabeth Wakefield? And, wait, who is that on the cover? Is that Todd Wilkins, her steady boyfriend throughout most of the Sweet Valley series? Wait a minute ... what's this on the blurb about some guy called Tom? And what's this about Jessica and her duty as a ... wife?
By 1993, Sweet Valley High had been going for ten years. From the original series, two very successful spin-offs had emerged. First Sweet Valley Twins, featuring Elizabeth and Jessica Wakefield at age twelve, made its debut in July 1986. Then, in October 1989 Sweet Valley Kids came along, a series of illustrated junior novels that featured Elizabeth and Jessica at age seven. It was about at this point that Sweet Valley High was nearing it's 100th novel, which was celebrated with a seven-part storyline that I'll probably cover in more detail on here at some point, and some formatting changes. The books became longer, looked a little different and the price went up just a little. But that wasn't the only change on the horizon, as an ad in the back of one of the books informed us. Elizabeth and Jessica Wakefield were off to college.
Sweet Valley University debuted in the United States in September 1993, with the first two books in the series being released in the same month. (Though for about a year afterward, fans would have to wait two or even three months for the next instalment.) This new series featured Elizabeth and Jessica at age eighteen. It was the start of a new academic year and along with Todd Wilkins, Enid Rollins, Winston Egbert and Bruce Patman, they were off to begin their college careers at Sweet Valley University. And because in this series the twins were slightly older, and because it was pitched at readers aged 14+, the stories promised to be edgier.
What we got was Elizabeth experiencing an acute bout of homesickness, Jessica hooking up with, and eventually marrying, a guy her new college friends warns her is bad news, lots of fade to black sex and drinking, and the first of many unsuccessful attempts by the ghostwriters to reinvent Enid Rollins as someone interesting. Oh and there's a psycho on the loose who, predictably, is obsessed with Elizabeth, because for some reason, the psychos always seem to choose her over Jessica to get excited about. Anyway, book six rounds up a number of story arcs from the first few volumes in the series and sees Elizabeth finally get together with Tom, star reporter from the student news station, after the shock discovery that Todd wasn't quite as honest or as squeaky clean as she thought. Tom would be Elizabeth's main man for well, about the first half of the series and fans responded well to the upgrade. Even if he was, eventually, revealed to be a bit of a bastard. And don't even get me started on Sam, Elizabeth's next long term romance ...
As well as the main novels, the Sweet Valley University series had a number of Super Thrillers, each of which placed the characters in situations that bore some extreme similarities to various movies including, surprisingly, Thelma and Louise. (I look forward to talking about these in more detail in later posts.)
Ultimately, Sweet Valley University was a fun, fresh update to a much loved series, one that ran for an impressive 63 numbered volumes as well as several special editions. The series ended in 2000 and was superseded by a six volume series that featured Elizabeth living on her own in London.
Greetings From the Unicorner Sweet Valley University