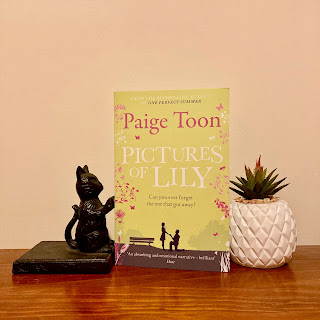 What a delight is Pictures of Lily. As the novel opens, Lily is sixteen years old and completely opposed to her mother's grand plan of moving to Australia so that they can live with her mother's new boyfriend, a man named Michael that she's met on the internet. Which is kind of a problem as right now, the pair are driving along the Princes Highway in the direction of Michael's home in the Adelaide Hills. Over the next few weeks and months, Lily has a number of life-altering adventures working at a local conservation park. She soon finds herself falling for Ben, a who works at the park. The only problem with this arrangement is that Ben is twelve years older than her. He's also engaged to another woman who lives in the UK. And although he finds himself falling for Lily, he knows that the situation is wrong. He leaves for the UK and he and Lily do not stay in touch. Ten years later they meet again in Sydney. Only this time around, Ben's divorced, and Lily is an adult and she's just accepted a marriage proposal from her long term boyfriend. But the pair seem to be falling for each other ... again.

I absolutely loved this one first for its descriptions of the Adelaide and the Adelaide Hills. Books set in Adelaide are few and far between and this one takes a lot of time and care to accurately describe the best of what the region has to offer. On a similar note, I really enjoyed some of the descriptions of Sydney--of the characters riding the ferries, and the visit to the zoo. The situation itself, of Lily and Ben falling for one another at the wrong time is heartbreaking, but is handled well. The reader sees Ben's struggle, but he's shown to be a gentleman at all times. It's obvious that he does truly care for Lily and that leaving is an act of kindness. Lily, of course, see's things differently and her emotional struggle is much harder, particularly as it seemed she had little in the way of guidance from her mother.

Overall, this is the story of a heartbreaking situation told well.